On the evening of July 7, the three, newly-elected members of the Mammoth Lakes’ Town Council took their oath of office and pulled up a chair behind the dais. New members Rick Wood and Matthew Lehman, as well as incumbent John Eastman pledged their faithfulness and took a seat as outgoing member Wendy Sugimura and outgoing Mayor Neil McCarroll practically fled from their positions.

Before getting down to the business of choosing a new mayor, John Eastman took the opportunity to describe how disappointed he was that it took two weeks after the election results had been certified for the new members of Council to be sworn in. The results were certified on June 23 by the County Recorder but had to be approved by the Mono County Board of Supervisors. The Supervisors’ regular meeting had not been until July 6, according to Jo Bacon.

“We in the private sector verses the public sector like to see things done quickly,” Eastman said. He added that the Supervisors should have held a special meeting to approve the certified results. 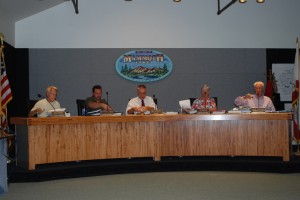 Skip Harvey was then chosen as Mayor after Eastman, who had been next in line but had been the second highest vote-getter in the election and would therefore end up serving as Mayor twice in his four-year term if he took the position now, declined. Harvey agreed to serve as Mayor as long as the process of how the Town chooses its Mayor was reviewed because he and other members of Council believe it is a flawed process.