Watson, who replaces just-retired Chief Randy Schienle, is ironically about a decade older than Schienle and brings with him more than 37 years of law enforcement experience.

Watson spent the past 8.5 years as South Pasadena’s Police Chief. Before that, he spent almost 29 years with the Los Angeles Police Dept., retiring at the rank of Commander.

He is currently serving as Mammoth’s interim chief on a 12-month contract.

Among the directives he’s been asked by Council to complete:

3. Recommendation on whether or not to fill a school resource officer position.

4. Recommendation on degree of priority for a new police facility.

5. Recruitment of a permanent police chief.

Interestingly, Watson is not precluded from applying for the permanent position, nor does he appear ready to retire.

“I’m not ready to retire,” he said in affirmation. “I like cops. I like what we do. It’s a noble profession, and I’ve never regretted it [going into law enforcement] for a minute.”

It appears Watson may have had a leg up in the recruitment process thanks to his former professional relationship at the LAPD with Bishop’s esteemed Police Chief Kathleen Sheehan, who served on the recruiting committee.

Watson was a longtime law enforcement trainer for the LAPD and retired as the department’s Personnel Manager.

His initial impression of the department has yielded a lot of positives.

“The caliber of employee is high. They’re committed to the community. I’m impressed with the people at the Mammoth Lakes Police Dept. Not that I didn’t expect that, so much as I didn’t know what to expect.”

He has been debriefed by Schienle a few times. “I need to know his take on things and factor that in [to my assessment],” said Watson.

Watson is married (Kathy) and has two children, ages 34 and 32, and two granddaughters.

The house his grandfather built in Glendale in 1951 is now occupied by a 4th family generation, as his daughter will live there while he’s gone.

Interpret that as you will, but it appears the Watsons have a certain solidity about them. 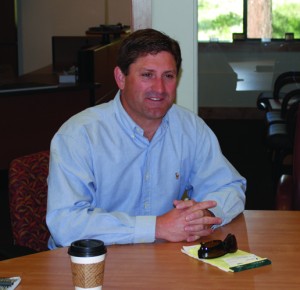 Mammoth’s Destination Marketing Organization, or Mammoth Lakes Tourism, now has its face in the form of newly-hired Executive Director John Urdi. Urdi hails most recently from Grand Targhee Resort in Alta, Wyo. While he does not officially take on his new post until July 26, he visited Mammoth on July 8 to hold a press conference and begin to let his new community get to know him.

“I hope that being an outsider will give me a good perspective to evaluate everything,” Urdi said, using his confusion of Mammoth’s summer music scene as an example of someone outside looking in. He has directed staff to begin putting research together on all the programs Mammoth has so that upon his return he can start to wrap his arms around everything and determine a priority list for getting started.

Urdi described his ski beginnings and resume of extensive success in mountain resort marketing, most recently as the Director of Marketing and Sales at Grand Targhee.

“I started as a ski patroller at age 15 and my passion for the sport [of skiing] led me into the tourism side of things,” Urdi said. His parents thought he just wanted to be a ski bum when he said he wanted to make a career out of the industry.

A native of Concord. New Hampshire, Urdi has slowly made his way across the country to end up in California. One stop along the way was to serve as Director of Marketing and Sales at Colorado Ski Country USA. It was while interviewing for that job that he was asked why he wanted to move to Colorado.

Urdi, referencing John Dillinger, said, “because that’s where the snow is.”

So in his endless quest for snow he has found his way to Mammoth and hopes to get everyone in town to pull together for a common, marketing purpose.

“Everyone needs to understand the value of working together,” he told the press. He hopes to use co-op advertising as well as other forms of partnerships to make the DMO’s small budget stretch further. His ideas of partnership definitely have Mammoth Mountain in the mix.

“I don’t agree with the mountain/town disconnect,” he said. “We need to have year-round marketing from everyone.”

Howard Pickett, Chief Marketing Officer for MMSA, was in the room and did not speak to the contrary.

Urdi returns on July 26 and will take part in several other meet and greet opportunities.