First, the Huskies showed their track teeth during the Whittel Warrior Invitational at Lake Tahoe’s Zephyr Cove on Sept. 10. More than 30 high schools raced in the event for “best of the best” bragging rights. MHS only fielded seven runners from its team, but turned in finishes that reminded the larger schools not to overlook the Huskies.

Kicking things off was Freshman Hailey Hugelman, who ran her first-ever race in the frosh division, and surprised everyone including her coaches with a scorching second-place finish in a field of 70 (you read that right — 70) runners. 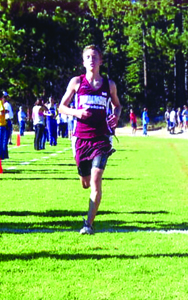 The next star to shine came as no surprise. Toby Qualls led the Huskies team as a Freshman, and has since upped his training even further under the supervision of coaches Andrew Kastor, Tomas Rodriguez and Rob Friedl. This summer, Qualls also trained alongside (and even beat) some of last year’s best state championship runners.

Though a Sophomore in class standing, Qualls was deemed overqualified for the Sophomore division, and was entered in Varsity instead. Of the 150 runners who started, Qualls blasted his way into second place, bested only by a Senior who turned in the third-fastest ever time on the track.

The Huskies next stop was the North Tahoe Invitational on Sept. 17, which broke all previous entry records and had more schools and runners than ever before. Mammoth brought the whole team, boys and girls, who competed in Freshman, JV and Varsity divisions.

Hugelman again jump-started the Huskies with a medal and 12th place finish out of 75 runners. Senior Kristen King, one of the top runners on last year’s girls team, notched a big 22nd place finish out of 130 runners. “She was getting over a cold to boot, and did just a great job,” Coaches Scott Luke and Friedl marveled.

The most competitive race, however, was the final race of the event, in which 235 boys duked it out on the track. Qualls ran Varsity against some of the best in the state, and emerged as only one of five runners to break the daunting 20-minute barrier.

His efforts were rewarded with a medal and a fourth place finish. No other runners in his age range reportedly came close.

Perhaps the biggest surprise in this event came in the overall standings. Schools had to finish in the top 20 to medal, and the Huskies finished 16th, which the coaches said had a lot to do with the contributions of Mammoth’s soccer players.

It takes five runners to score in cross-country competition. And with Mammoth looking to rebuild its team and soccer players looking to improve their stamina, apparently the cooperative effort paid dividends.

Armando Alvarado, Juan Maldonado, Johnny Lopez, Jesus Leon, Fernando Ramirez and Jose Godinez all finished in the top 100, placing strong enough to put Mammoth in medal position. For eight runners, it was their first race, according to Friedl. “Learning how to pace yourself is huge, and the strong finish of all our runners bodes well for the entire team,” Friedl said. “We’re a small school, but our runners showed they could do very well, even against much larger schools.”