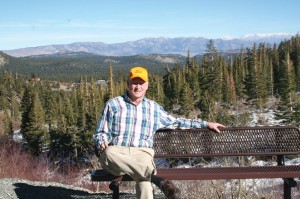 The social media onslaught will only accelerate

During the first break in Travis Huff’s social media workshop this past Thursday at Mammoth’s Cerro Coso campus, I got to talking with Mammoth Lakes Tourism Executive Director John Urdi.

“Back when I was just out of school,” I said, “and writing bad fiction and wondering how I would ever support myself, I got roped into attending an Amway dinner. This felt just like it.”

Urdi laughed and said that the current state of social media is like an old-time  Tupperware party. You can’t afford not to be there. Or at least that’s how they pitch it.

Huff, the CEO of Real-Time Outsource based out of Fresno, was brought to Mammoth this week to preach the social media gospel to two full workshops (70 people in total) of Mammoth locals eager to know how to Facebook, Tweet, get LinkedIn and otherwise make the best use of their digital space.

And like any speaker in the modern age, Huff backed up his sermon with plenty of PowerPoint slides.

Google searches? Up tenfold from 2006 to 2009 from approximately 3 billion to more than 30 billion.

One slide claimed that one-in-three women ages 18-34 will check their Facebook account before doing anything else in the morning. No statistics were given as to how this would affect the nation’s birthrate.

LinkedIn? Has rendered the modern resume obsolete. Now you just post all your exaggerated accomplishments online with testimonials from as many important-sounding people as you can find.

The first question from the back of the room asked how one buys stock in social media. An alarm bell for me (bubble bubble bubble), but as the purveyor of traditional media, any criticism coming from me just sounds like sour grapes.

*Though like any good lemming, even The Sheet’s active on all these platforms, and thank goodness Lara actually updates them!

Huff worked for Disney when he got out of college and became disillusioned at trying to sell television advertising in a changing world where DVRs and on-demand programming was affecting the value of the airtime he was selling. Even now, Huff will readily admit that in this rapdily morphing digital age, the target moves awfully quickly.

And the social media craze is far from over.

But even I had to laugh at some of Huff’s hyperbole. Every person he quoted who talked about the limitless vistas of the social media age was a marketer. And Huff also parroted Facebook founder Mark Zuckerberg’s line that he’s just doing this in the hopes of creating a more open society … even as Zuckerberg’s selling your personal data.

Huff’s response to concerns about privacy? Don’t put anything online you don’t want anyone to see. Fine then, we’ll put it in the paper instead.

Onto Ski Host Steve Schriver, pictured on the cover.

Schriver has accomplished the stunning feat of winning approval from multiple agencies to get three benches installed along the Lake Mary Bike Path.

Schriver bought a bench for his late brother about four years ago (that bench is located on the bike path behind Cerro Coso college) and while he was at it, bought three more.

He then brought various entities to the table, including MMSA, the Inyo Forest and the Town, to get the benches installed.

He is holding a dedication ceremony this Saturday at 4:30 p.m. Park at Tamarack and walk down.

Sheet: How’d you choose whom to dedicate the benches to?

Schriver: I decided based upon the fact I bought ‘em.

In the future, however, Schriver has a larger vision of more and more benches throughout town and some sort of cooperation between entities to determine who should be so honored.

Schriver, 63, has served as a Mountain Ski Host for the past five winters. Though he has never lived in mammoth fiull-time, he has been visiting since the ‘70s and would like to move here … if the house in Lancaster will ever sell.

Schriver, a cancer survivor (his brother was not so lucky), has found a second home in his role at the mountain. “My favorite part of skiing is helping people on the mountain.” He has also found camaraderie within the Host Dept.

On Wednesday evening, the Planning Commission and Town Council met to discuss the progress and direction of a “Work Program” for Community and Economic Development. What was discussed at that meeting wasn’t as interesting as the Commission’s prep notes for it, which turned out to be far more interesting both in terms of what it did and didn’t say.

Titled “Economic Development: An Investment Strategy for Hard Times,” the document, initiated in part by Planning Commissioners Rhonda Duggan and Elizabeth Tenney, starts out bluntly by saying, “We’re not selling apples on street corners, but these are hard times indeed.” True enough, Mammoth doesn’t quite qualify as subject matter for a Charles Dickens novel, but the first paragraph goes on to cite “hard times” as part of the rationale for such a strategy. The recessed economy, “the specter of an unfavorable legal action against the Town” (the Hot Creek Airport litigation decision, presumably), declining visitation and occupancy rates, declining revenues leading to faltering or failing businesses, and increasing demands for diminished dollars from stakeholders and local organizations with “good ideas” are all listed as why we need a “thoughtful, all-encompassing investment strategy for when the economy recovers and to survive until it does.”

Reality check: we live in a ski town, which is dependent on visitation, that can ebb and flow with the weather. Even without a recession, we’d still feel the lack of a solid economic plan in a couple of back-to-back dry ski years. And let’s not forget that even the smartest businessmen got burned even while the economy roared. Anyone staying at the Ritz tonight?

On the other hand, the commissioners may have it right when, later in the document, they said, “We can’t just chop up the cadaver of available funding.” We’ve been doing that so long, the budget has its own organ donor card. We could be the storyline for an episode of “CSI: Careless Spending Investigators.”

And the Planners approach to putting the “Why” and “Where” before the “How” makes sense … we should practically look at a project and evaluate its merits to the town and its future before just agreeing that it should be built. Projects in Mammoth should be like screenplays in Hollywood. Lots of people write them, but most will never be made, and there’s a good reason for that. They suck and won’t generate any revenue for the studios.

Finally, I submit that visitors don’t necessarily come here looking for a “top of the mind” experience, as the document suggests. I think they want more of a “time OUT of mind” experience, one that lets them forget that they have to navigate the 405 or make that commute to and from Oakland across the Bay Bridge when they return home. They’re here to forget. So let them. Don’t over-schmaltz them with lots of logos and feel-good slogans. Take care of them, show them a good time and the rest will take care of itself. Look at our summers: fishing, concerts, Shakespeare in the Woods … and in winter, concerts, après ski, Night of Lights … great dining, skiing and other snow sports.

Look at what’s been achieved thanks to the renewed Village experience, a textbook example of what works and how to best make use of it.