Something you don’t see too many of in the Eastern Sierra is empty lots.  There is plenty of open land, but in the towns, very few empty lots. You can either thank or blame the LADWP for that, depending on your point of view.

Last week I noticed the heavy equipment parked in front of the old building that Simpson Tire just vacated as I headed south for jury duty, and when I came back north not only was the whole lot cleared out but the old Modern building gone as well. Paul Simpson, the previous tenant, said it took about an hour and a half to tear it down and haul it off.  “We had some plans for it, but with the economy and all, it didn’t make sense to hold on to it,” he said. “There was a whole lot of history in that building.”

Earlene Beaver (nee Brown) of Brown’s Supply was a little more nostalgic. “We almost cried when they tore it down,” she told me as she took down an old sepia-toned photo sitting on the counter. “That used to be our place! The Modern Carpets building was the Hofbrau restaurant. I used to wait tables there when I was in high school.” She pointed out a car in the picture, “That’s a ’63 Mercury, so this must be the mid-sixties.” The building went on to become Golden State Cycles for many years, before they moved to the mid-town Vons building.

James Jackson of the Department  of Water and Power real estate office said that the buildings just weren’t worth fixing, so when the lease came up, they just tore it down. “The land will probably go up for auction,” he said, “but I can’t promise you that.” He couldn’t say when or even if it was a sure thing, but the land is designated “surplus” right now and selling it at auction is the most likely event. I asked him about the old Owens Valley Motors property adjacent to the Fairgrounds, and he said that it is at a standstill. The dirt is contaminated and no decisions have been made on whether it will be cleaned up, the building torn down, or left as it is. 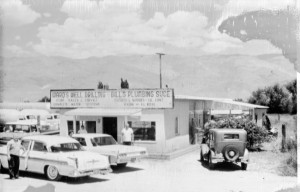 The old Simpson Tire building (without the beautiful Kmart plaza in the background), circa 1965. Photo courtesy of Earlene Beaver.

If you’ve got Bishop news, get ahold of Ian at roadtrip2@verizon.net.