You know you’re at a hip hop show when you walk up to the club and all you hear is a faint, muffled but beautiful “bwomp tick  bwomp bwomp tick” vibrating through the walls. The sound is a reminder that you’re about to happily loose half of your hearing from a combination of blasting bass and MCs shouting, “Now put your hands up! Put your hands up!” These small details are stereotypical to a rap show, but ultimately they help define exactly what a rap show is and what a rap show should be.

Being a lifelong fan of  the hip hop arts, this past week I got the opportunity to attend two rap shows here in Mammoth Lakes. Unfortunately, one fit every miniscule detail of what a rap  is all about … and well, one didn’t.

The hip hop heads of Mammoth Lakes were served two polar opposites of the rap spectrum. On one side we had Del The Funky Homosapien who performed on Thursday at Hyde Lounge, and on the other end we had Dirt Nasty who played Sunday night at Whiskey Creek.

Del, whom I’m a huge fan of, is considered by many to be a franchised member of hip hop royalty and is a descendant of the what’s been labeled as the “Golden Era” of hip hop. He’s without a doubt a rap legend who has performed with everyone from The Gorillaz, Aesop Rock, Mike Relm and Handsome Boy Modeling School.

And then there’s Dirt Nasty, who we profiled here last week. Nasty is not quite a true rapper at heart. Meaning, he’s an actor who raps. His real name is Simon Rex (former MTV VJ) and he’s the first to say that his character “Dirt Nasty” is just that…a character. Being a fulltime actor coupled with the fact that rhyming is his secondary priority, Dirt Nasty has miraculously made a name for himself with his comedy-centered rhymes and over the top antics.

We need to get one thing straight, Del’s appearance at Hyde was billed and promoted as a show. Meaning he would perform … you know, with a performance. I’m not sure how to get any more specific than that. But as anyone who was in attendance at Hyde Lounge last Thursday will tell you, there is no way that what happened could be defined as anything close to show-worthy.

As previously stated, there are some things you just expect from rap acts. However, when I walked up to Hyde that night it sounded as if no one was there. The only indication that a show was going on was the massive line of mostly locals wrapped around the outside of the building. When I got in, the bar was about half full and Del was just starting his set. Everything seemed alright, but there was one major problem … it sounded awful. I didn’t get the technical breakdown of exactly what happened, but it sounded like the entire sound system was powered by a pair of free airline headphones that were being filtered through a rusty tin can. 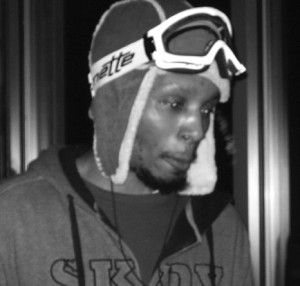 Del at his Hyde appearance Feb. 10.

I felt bad for Del. I love the guy. I made an effort to be in the front row and it was painfully obvious that he wasn’t thrilled. Honestly, I haven’t seen an entertainer look more uncomfortable since Louie Vito was on “Dancing With The Stars.”

However, being the good sport he is, Del played a few songs and then eventually called it quits after about a half an hour. No performer deserves to be in a situation like that. I’ve seen Del rap before and he’s actually really good. I can tell you from the bottom of my heart that I truly felt bad for Del. But I felt even worse for the people waiting in the enormous line outside.

When the show was put to a screeching halt, no one from Hyde told the people waiting outside it was done. Instead Hyde let the people wait patiently in the frigid winter air …for a show that wasn’t happening! However, people were given an option to be allowed in immediately. “I can let you in if you get bottle service!” shouted the doorman, “and there’s a two bottle minimum.” You could hear a quite murmur from the line, “Well how much is a bottle?!” shouts some kid sporting a beanie and a tall hoodie. “200 bucks.” The line erupted in laughter. “We’re all lifties dude!” As I stood by the front door when these people were eventually let in, one simple expression was heard more than once, “Huh, what the F*ck?!”

I suppose Hyde figured it was better to have a line outside while being at half capacity, rather than simply telling people straight up that the show was canceled.

Perhaps other departments at Mammoth Mountain should follow this same mentality. It would be awesome. Then we could have really long lift lines with a ton of empty chairs going up the mountain. People will love it.

Hyde Manager Tommy Smith’s assistant Brittney Koehler told the Sheet last Tuesday, “Del wasn’t supposed to play a show. It was more of a hey I’m here kinda thing.” She also claimed that Hyde made an announcement at 12:30 that the “appearance” was over. Which makes me wonder, why did Hyde promote Del as a show? Why didn’t they just say it was going to be an appearance? And secondly, if they made an announcement (which I didn’t hear thanks to the sound system that resembled air being let out of a squeaking balloon), why would they tell people the show is over an hour after Del left? Thanks from the people outside.

I applaud Hyde for the opportunity to hear live music and I certainly appreciate the efforts put forth by the Hyde staff to put on this free show … I mean appearance. But one thing will always be a constant when it comes to the entertainment business (or any business for that matter) a little honesty goes the distance. And as a good example of this, let’s look at the Dirt Nasty show.

For weeks, it was advertised as 13 bucks in advance and 15 bucks at the door, which people consistently groaned about prior to the show. But to be fair, for three different performers in one night … that’s really not that much.

Anyway, on Sunday night all I heard as I approached Whiskey Creek was “bwwomp tick bwwoooooomp bwwomp tick.” A few kids were outside smoking cigarettes, and when I walked through the front door promoter Billy Drewitz (of Late Nite Productions) greeted us and thanked us for coming. As I went upstairs I noticed the bar was relatively packed. DJ Mo-Funk and Rodney-O were in stride and people were already getting their dance on. To say the least, there was a good buzz in the air.

That night there were two opening acts, The Chor Boys and Dirt Bag Dan. I didn’t really care much for the Chor Boys (they were a bit too Limp Bizkit for my taste) but Dirt Bag Dan, who could have easily been Zach Galifianakis’ stunt double, slayed the mic while he hopped around on stage with an energetic presence and a quick rhyme style. Not since poet/MC Sage Francis have I seen a white dude with a beard rap that hard.

After a few cocktails Simon Rex stepped up with his buddy Andre Legacy, and the first words that came out of his mouth were, “What’s up ya’ll?! Who wants to party with us tonight?! Alright cool. Now everybody get your d*ck sucked!” The bass dropped, and from that point on his “character,” Dirt Nasty, was in full form.

Even Nasty’s lyrics and stage presence were without a doubt kinda revolting and offensive, I think everyone in attendance would collectively agree that on some dark level he was pretty damn funny. A few times throughout the night I thought to myself, “maybe actors make good rappers? Rapping through a huge chunk of his songs, Dirt Nasty performed the whole night out and left people sweaty and satisfied. He did what he was paid to do. I won’t give Dirt Nasty too much credit, because as Chris Rock was so pointy stated, “N*@#*&s  always try’n to get credit for things that they suppooosed to do!” Nasty killed it.

When you leave a rap show there’s a few things that should always happen. First, you should be covered in booty sweat. It’s gross but true. Second, your chest should feel like you have a subwoofer stuck on repeat trying to break through your chest ala the film Alien. And third, as much as it is always  annoying to your friends and co-workers, you should have some stupid lyrics stuck in your head for the next couple days. The next morning I was rapping to myself in the shower, “I gotta a gold chain…I’m like yo mang!”