“It’s one thing to read about an issue, it’s another thing to see it and really grasp it,” State Assemblymember Kristin Olsen told The Sheet on Monday as the reason for her visit to Mono County.

Olsen visited the Eastern Sierra to learn more about the partnerships already in place at Mono Lake, and to look for possible solutions to keep the park, which is still sitting on the state’s list of potential closures, open.

“There seems to be no rhyme or reason as to why certain parks landed on the list,” Olsen said. “Clearly monetary reasons don’t make sense in the case of Mono Lake,” she added, referring to the park’s low cost of operation. She felt that part of the reason might have been that Governor Jerry Brown had just picked up the ball where former governor Arnold Schwarzenegger left off, as he got situated in office.

Nonetheless, it’s on the list, and agencies such as the Mono Lake Committee are now racing against a looming June 2012 deadline to try to keep the park open.

One possible solution, which The Sheet reported on last week, is AB42, the bill currently on Governor Brown’s desk that would allow non-profits or local government agencies to partner in operating agreements with the state to run parks.

“AB42 is a mechanism to use, but unfortunately at the eleventh hour, after we had already voted on the bill, it was capped at 20 parks,” Olsen said. So the 70 parks on the closure list will have to get in line.

Olsen said she had no idea why the cap had been placed on the bill at the last minute and was looking into the rationale at the author’s office.

The Mono Lake Committee and others in attendance on Monday hoped to show her how organized the agencies supporting the lake already are, and how easily these agencies could take over operation of Mono Lake if given the chance. 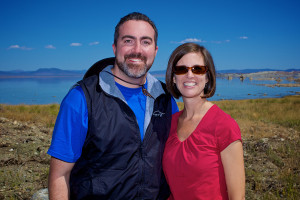 “We hope she goes back and tells the higher ups that the people here have it together, and the state should let us try [to run the park],” said Robert Hanna, who was the spark for bringing Olsen to Mono County, and is also behind Senator Ted Gaines’ visit this coming Monday, Sept. 26. Hanna is the great, great grandson of John Muir, and has many ties to the Eastern Sierra.

“Perhaps we could be the model that other parks use,” Hanna added.

But some in the community have begun to question what a closure at Mono Lake would actually mean. How do you shut down a park that is made up of a lake covering 65 square miles?

While the answers to how the closure would occur are unclear, the meaning of that closure was completely transparent to Hanna.

“A closure means doing something that didn’t even happen in the Great Depression,” Hanna said. “The state can’t just threaten parks every year when the budget gets rough.”

The threats themselves could end up hurting the park’s visitation numbers just as much as an actual closure because people may be confused by the messaging, think the park is already closed and not plan a visit.

Visitor numbers this summer have been stable, according to park rangers in attendance at Monday’s meeting with Olsen.

As for the potential of the state expanding the park closure list, Olsen did not think that was a sensible option.

“Closing more parks doesn’t get us close to our big picture goals,” she said of the relatively small amount of savings that would come from park closures in comparison to the large budget deficit the state is trying to solve.

The Mono County Board of Supervisors has scheduled a special meeting on Oct. 6, at 9 a.m. at the June Lake Community Center. These will be the very first discussions of how the county might move forward with impending closure of the state park portions of Mono Lake.

During her visit, Assemblymember Olsen also visited Tim Alpers at Conway Ranch to see what, if anything she could do to bring that issue (discussed in last week’s issue of The Sheet) to a close.

“My first step is to schedule a meeting with the Caltrans Director so that I can hear both sides,” Olsen said. “Not the District 9 Supervisor, but the person that District 9 reports to,” she clarified. “But my initial thought is that it is unreasonable for Caltrans to hold up a private/public project because of [issues with] scenic views and wildlife.”