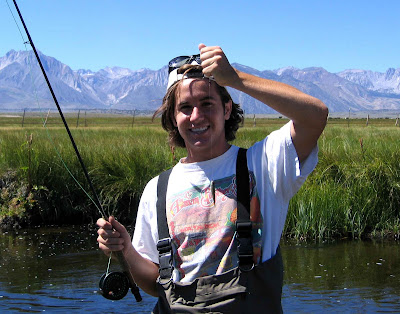 You’d be hard-pressed to find someone in town who doesn’t love this time of year. The “shoulder season” between summer and winter in Mammoth equates to crisp, blue skies in the morning turning to a warming sun in the afternoon. The very early morning skies are dotted with bright constellations with the occasional satellite drifting through space high above.
Aspen quake in the light breezes in midday as they begin to show their first hints of subtle yellow hues. Pine needles dust driveways. I see endless piles of stacked pine as I skate around the ghetto after school behind Bruin and Bodie. It’s pretty fun, as I cruise at mach speeds through intersections and past cars. I can feel the entire town has a mellow aura to it as the mountain preps for the weekend warriors who are still a few weeks away from coming in droves with the dumps.
Yep, this is an amazing place to be in the middle of September. As for the angling, the big fish are beginning to move around and get their final gorge on before Father Frost dusts his first sprinkle of sugar for the alpine season. If there is any stress in your life, you can release it all by hitting the waters for a couple of hours and watching your worries drift downstream with the caddis busily laying eggs on the surface. I heard a good phrase somewhere, along the lines that the only difference between a fishing guide and a psychologist is that one can prescribe drugs and the other can’t. It’s true. Even we guides need some time on the water without clients for some serious trout catching. There is though one true concern that I do possess: where to commit for my afternoon of “self-imposed therapy.”
Attempting to decide whether to hit the East Walker, the West Walker or Hot Creek this week is about as easy for me as calling the winner of the Georgia Bulldogs playing against the Arkansas Razorbacks. It’s not an easy decision to make, about as difficult as calling out the Iowa Hawkeyes against the Pac-10 Arizona Wildcats. Figure I’ll watch some ball this Saturday, and get on the waters on Sunday.
I hit up Hot Creek last Wednesday and could do no wrong with small (18/20) Low Profile Caddis patterns. There was an impressive hatch in the middle afternoon, and the trout were on the rise. The vegetation in the creek is still impressive throughout a few stretches, but noticeably on its tail end in other parts of the fishery. Tent Wings will work as well.
For nymph patterns, Scuds and WD-40s will pick off trout like UCLA Bruin Alterraun Verner intercepting passes against the Kansas State Wildcats. Plenty of trout are running after fry to the likings of ‘SC’s Joe McKnight who’s gonna cut Zs across the field in Seattle. If you can find a pool to strip some small streamers, do it. Odds of getting a hit are about as good as Texas Longhorns beating the Texas Tech Raiders.
Up north, get at some of the trophy trout in the East Walker with Yellow Stimis, Elk Hair and Micro Midges. Lots of good trout coming out of its waters. Another great place to spend half a day is further up the highway in Pickle Meadow working the bends of the West Walker. Bait anglers are going to get hits with Powerbait and nightcrawlers. Running Panther Martins through the currents will also get grabs. Fly anglers are going to get hits with Flashback PTs and Hares Ears. Catch one for the Cal Bears bound to beat the Minnesota Gophers … now there’s an intimidating mascot for you!
You can fish the Eastside in the morning, and still catch a college game at Gio’s with a slice of pizza and pint of Paranoid Ale. I’m curious to see how Florida is going to stand up against Tennessee, after a couple of wins for the Gators against high school caliber programs. Stressful way to watch the world go by? Maybe for Tennessee fans, but not for me.
A more detailed report can be found at http://kittredgesports.com/fishing_report.php. Leonard guides for Kittredge Sports. Call 760.934.7566.