On the heels of its most successful Wounded Warriors event yet, Disabled Sports Eastern Sierra (DSES) is teaming up with local resident Marc Margulies for a fundraising event coinciding with the premier of “Act of Valor,” a motion picture hitting theaters nationwide on Friday, Feb. 24.

Margulies has been a cameraman since 1978. He and his wife, Lou, own the local Mammoth Lakes Laundromat, the Laundry Annex and Aloha Sudz. Marc was part of the crew for the new film, which is cast with active duty Navy SEALs.

The film follows an elite team of Navy SEALs as they embark on a covert mission to recover a kidnapped CIA agent. Also threaded into the plot is the hunt for the “bad guys” who kill the U.S. Ambassador to the Philippines at the beginning of the film. The Ambassador getting offed is a face that many locals will recognize, as it is none other than Margulies himself, who was cast in the role during filming by co-director Scott Waugh.

“I was working on the film and Scottie Waugh said he wanted me to be an actor in it,” Margulies said. “So, I played the role and even have some lines. I also got a custom-made suit out of it.”

Margulies’ scene was filmed in Cambodia, and in a small hint he related that his character’s death revolves around an ice cream truck. While acting, Margulies also had to run interference with the camera crew, which didn’t know how to load the film into the camera without him.

“I worked as an actor and a camera assistant on that day,” Margulies said. 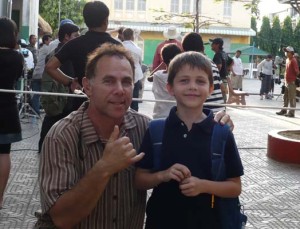 Margulies and the young actor who plays the US Ambassador's son

The film, according to Margulies, honors service people.

“I’ve worked with a lot of actors who are using guns [for their roles], but to see these guys handle a weapon was very real,” Margulies commented.

Also very real is the DSES fundraiser being held on the evening of Feb. 24; head over to Minaret Cinemas that evening at 7 p.m. for free appetizers provided by Roberto’s, plus a no-host bar of beer and wine, in addition to the film’s screening.

Anything that is donated above and beyond the cost of your movie ticket will go to DSES. Following the screening, Margulies will be on hand for a Q&A.

“There are 210 seats in the theater and we hope to fill them all,” said DSES Executive Director Kathy Copeland. “The more the merrier.”

Directed by Mike “Mouse” McCoy and Scott Waugh, “Act of Valor” is being touted as the ultimate tribute to the troops, which is why the partnership with DSES on Feb. 24 makes so much sense. Each year DSES and Mammoth Mountain host Operation Mountain Freedom for the nation’s wounded warriors. Servicemen and women enjoy several days of therapeutic recreation catered by DSES during the event. This year, 38 attendees made for the biggest event on record.

For more on the film visit www.actofvalor.com