“Come, ye philosophers, who cry, ‘All’s well,’ and contemplate this ruin of a world.” –Voltaire, Poem on the Lisbon Disaster, from “Candide”

This year’s California Reads program focuses on both Disaster and Democracy, and nowhere is either topic better illustrated than in author Rebecca Solnit’s new book, “A Paradise Built In Hell.”

Subtitled “The Extraordinary Communities That Arise In Disaster,” Solnit, a prize-winning journalist and writer, visited libraries in Mammoth and Bridgeport this past week, sharing her perspective with community members on how disasters are managed (or mismanaged) by the powers that be. She described how everyday people come together to weather both the disaster itself and the bureaucratic one that is typically generated in its aftermath.

She examines a variety of disasters, both natural and manmade to one extent or another. Breaking the book into sections, Solnit starts with one of the best known catastrophes, the 1906 San Francisco earthquake. She then progresses through the WWI era explosion of a munitions cargo ship in Halifax, Nova Scotia, the atomic bombs that were dropped on Japan at the end of WWII, the Mexico City earthquake in 1985, the events of 9/11 in New York City and finally Hurricane Katrina in New Orleans in 2005.

Solnit does fascinating work dissecting and examining the flaws inherent in authoritarian forms of government intervention on the heels of disasters, which can in some cases actually end up costing more lives than the actual cataclysms. The other half of her book’s thesis, however, is more hopeful, documenting the sense of community that tends to rise from the ruins of such horrific occasions.

The book has so far been presented in more metropolitan areas, but Solnit said it’s uniquely suited to the Eastern Sierra. “Rural people rely on each other more,” she posited. Solnit, who’s spent time in the area previously helping with research at Mono Lake, said the area has a peculiar kind of insularity, with often very divergent viewpoints finding ways to get along in a smaller living arrangement.

“This is about real democracy,” she said. “We’re good, smart people, and capable of enough to govern ourselves.” Our core beliefs, she thinks, are built on basic human nature.

Conversely, sociologists who have studied disasters post-WWII, she indicated, say there’s no such thing as a ‘natural’ disaster. Who gets injured and who gets helped are functions or failures of community, and decisions made are often cascading. For want of a nail, the [horse’s] shoe was lost, and so on, she illustrated.

The actual death toll from Hurricane Katrina, for example, was due in large part to a cascading series of events following the storm. The hurricane, she observed, was the least of it.

Authoritarianism is pessimistic, thinking that “only the heavy hand of government” can prevent pillaging, rape, murder and other atrocities. “Its view is that we’ll revert to some barbaric state,” our original nature. “Do we even have one?” she asked rhetorically. 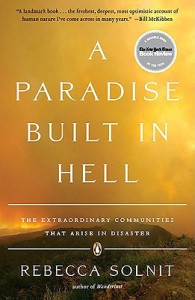 Solnit discusses the bonds that are formed during disasters

By contrast, she wonders whether “war zones” created by the military, police and other authoritarian agencies weren’t actually creating the conditions for perceived hysteria. “Looting,” which she said can also be interpreted as getting what’s needed for survival the only way possible given a total lack of commerce, was given the “death penalty,” with shoot to kill orders. Everyone, she said, was seen as a criminal, including tourists trapped in the Ninth Ward and even a convention of paramedics. Similar orders were given in San Francisco in 1906 and in Haiti following its most recent earthquake.

Poor or otherwise sloppy media reporting, she added, feeds the frenzy and hypes the real story to ridiculous proportions. False information and misinterpreted data manages to get out, giving the rest of us misleading impressions of what is really taking place. Some of that error-ridden reporting even affects government. In one instance, she cited the case of a Federal Emergency Management Agency refrigerated truck sent to the Super Dome to remove hundreds of bodies, reportedly mass murder victims. The truck arrived to find only six dead, four of those from natural causes.

Panic, she suggested, is wrongly used to describe a situation that more resembles survival instinct, such as running from the collapsing Twin Towers on 9/11. And “elite” panic, often employed by authoritarians, implies that “the rest of us are going to behave badly.” That, she said, often leads to prioritizing preservation of property over human life.

One reason for this could be the threat to authority from the community at large, which after such events seeks understanding of them, or some form of change or other things. Authority, on the other hand, wants to get back to how things were before.

“Who’s going to rescue you?” she asked. “Mostly you are.” Most of us, she thinks, will have banded together with family and other familiars long before any “first responders” arrive to lend assistance.

“People behave well,” she emphasized. “We’re good at improvising; we want membership, belonging, a voice, participation … things having nothing to do with consumerism.”

At first, she said, there is shock at the suddenness, the rupture of continuity. “But we find deeply meaningful moments in disasters. Our sense of mortality and priorities changes, the clutter of everyday life drops away.”

She listed numerous accounts of public sharing and caring. After its 1985 quake, Mexico City was a “society reborn.” The people triumphed. They overturned the country’s one-party system of government, and rallied around a masked wrestling superhero figure, Super Barrio, who championed the voices of those living in the lower-income parts of the city.

In New Orleans, the volunteer Made With Love Kitchen included one man from Boston, who said he was “filled with joy” at being able to help his fellow countrymen. And in the days after 9/11, an unofficial “commissary” made up of volunteers and donated services from local eateries sent tons of food to those laboring day and night over the wreckage at Ground Zero.

One of the best summaries of Solnit’s book came from young Dorothy Day, who was not quite nine years old during

the 1906 San Francisco quake. “While the crisis lasted, people loved each other,” she is recorded as having said.

Such, Solnit said, illustrates who we really are: people who come together when things are being torn apart. Far more often than not, compassion and empathy trumps fear. “Disasters are the hell you go through; paradise is what you find in the community that emerges on the other side.”

During the discussion that followed her presentation, more circumstances were discussed, touching on other types of “disasters” on a social level, such as racism, which led to the fallout from the Rodney King beatings in the 1990s, and even the combination of the Great Depression and Dust Bowl drought crisis of the early 20th century, that brought a large influx of migrants to California from other parts of the country.

Originally an essay for Harper’s that was bourne out of a college lecture series, the real stories of both disaster and humanity were, she said, ones that needed to get out.

Disasters will continue to present themselves, as climatic conditions and vulnerable population centers leave us open to peril. Still, local government that is both responsible and has good preparedness, she insists, will meet the peoples’ needs, including cohesive local efforts, such as Mammoth’s Community Emergency Response Team (CERT). Solnit is working on returning to address the team later this summer.