Natural phenomena tend to intrigue us, so it’s no wonder that this past Monday evening it was standing room only at the Mammoth Welcome Center Auditorium for a presentation on the Nov. 30, 2011 forest blowdown event in Reds Meadow and the Devils Postpile area.

National Weather Service meteorologist Rhett Milne provided details on what happened during that windstorm, from a meteorological perspective, and National Park Service employees shared data they have collected so far about the trees themselves, as well as updates on public access.

While the event affected large sections of the San Joaquin River watershed from Tuolumne Meadows to Mt. Whitney, knocking down thousands of trees along the way, it was Reds Meadow and the Devils Postpile area that took the brunt of the damage.

Dubbing it the “Devils Windstorm,” Milne unveiled its magnitude.

Using data he obtained from Mammoth Mountain Ski Area, he could see that the event lasted 12-15 hours, about twice as long as a normal windstorm in the area.

“An incredible pressure gradient looks to be the main driver of the wind event,” he said. “There was huge [air] pressure in the Reds area; 20 millibars in 13 miles.” Comparatively, Milne said, 20 millibars of pressure would normally be spread out across the entire state of Nevada.

According to the MMSA data, winds at the top of the Mountain were sustained at 140 miles per hour with gusts of at least 150 miles per hour (the equipment was accidentally governed at a maximum of 150 mph so gusts may have gone higher). Down at Mammoth Yosemite Airport, wind gusts were clocked at a mere 35-40 mph, according to Milne.

“We don’t know the actual speeds in the Reds area, but 150 mph sustained winds equal an EF3 tornado or a category 4 hurricane,” Milne said, putting the magnitude in perspective. “Past wind events [in the area] don’t even compare to the Devils Windstorm. Those events didn’t even break 100 mph sustained winds.”

Kathy Hilimire, a National Parks Service scientist currently studying the trees in Reds Meadow, further expanded on that perspective by reporting that in the Devils Postpile area there are approximately 190 trees down per mile.

“Eighty-six percent of the trees are uprooted while 14% are snapped,” Hilimire said. “We lost more big trees than small, but no particular species was affected more than others. The wind was indiscriminate when it came to that.”

Hilimire added that three things created the perfect storm that led to the outcome of the event: big winds, a long duration, and an atypical wind direction.

“The winds came from the north/northeast, which is not the usual direction of wind we receive here,” she said. Usually winds come from the south, southwest.

One item for scientific study, according to Milne, is whether or not the trees have adapted root systems to anchor them against the usual direction of the wind. The atypical direction on Nov. 30 would then have caught the trees on their weak sides.

Other factors that may have come into play include no snowpack on the ground at the time of the event.

“Would snow have encased the trees and helped hold them down,” Milne asked rhetorically. Going from a really wet winter in 2010/11 to a dry period may also have affected the stability of the trees.

While these factors will need to be studied further, Milne did say that future wind events such as the Devils Windstorm could be predicted by watching pressure gradients. He did not, however, believe that the unique event was related to climate change.

On Monday evening, Inyo National Forest Supervisor Ed Armenta stated that it is the Forest Service’s goal to open the road to Reds Meadow by July 4. Cleanup crews are working around the clock and on a media visit to the Reds area on Thursday, it was clear from the many cleared roads and the crews onsite that a lot of progress had been made. 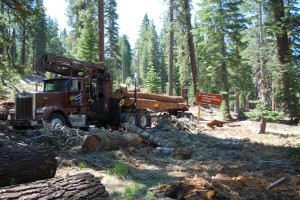 Other campgrounds such as Agnew and Soda Springs, which were hit the hardest by the downed trees, won’t be open for a while.

“Once the road opens the public should expect things to be normal except for fewer campgrounds,” Kazmierski said. However, the Forest Service has solely been focusing on clearing hazards from the developed recreation areas, so anyone wandering out of these areas should do so at their own risk.

What about the wood?

The Forest Service’s main contractor for hauling out the wood is currently Mammoth Firewood because the task requires the large machinery that a commercial company can supply. Eventually, the Forest Service expects to also hold a salvage sale to send many of the enormous logs to lumber companies to be used as wood products.

One bonus for campers at the Devils Postpile Campground this summer will be free campfire wood. This wood is only for campers at the Devils Postpile Campground, not for the general public. Not only is it a nice bonus to the campers, it also helps keep the public from bringing in its own firewood which could contain non-native insects that could do harm to the forest.