There’s a line from a forgettable (okay, they’re all forgettable, so how about more forgettable?) Matthew McConaughey film “Failure to Launch” where McConaughey, playing a slacker in his 30s who’s still living with his parents, says, “It’s going to take a stick of dynamite to get me out of my parents’ house.”

If Mammoth the resort town were personalized, many in town might characterize us as a slacker in his 30s living in his parents’ basement and saddled with an online poker habit (and debt).

But there’s something charming about the guy – he’s got enormous potential. He can be a whole lot of fun (when it snows, when he’s employed). And whether your preference is a nice bottle of wine or a fat joint, he’s always supplied.

He’s always up for a one-weekend stand.

Some call him Clouds McCloud …

But the eternal question around here has always been – can Mammoth commit to long-term (at least one week) relationships with his guests?

Developers Jim Demetriades and Chuck Lande both believe the answer is yes, and they’re putting their money on it.

Starting next week, he will launch an aggressive marketing campaign touting Sierra Nevada Lodge and its three restaurants and four bars as “Mammoth’s Newest Resort.”

Described by Demetriades as balancing the rustic and luxurious, the Lodge features the amenities of an upscale hotel (bellman, concierge, shuttle service, wi-fi, room service/takeout from all three restaurants). The refurbished rooms have heated bathroom floors and toilet seats and new mattresses and linens.

Some of the new suites have fireplaces. 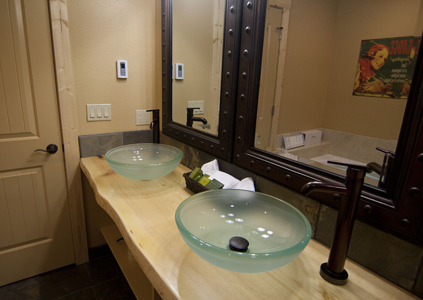 Your butt will never be cold again thanks to the heated toilet seats.

In addition, guests who’ve stayed at the Lodge before will notice that the new insulation has effectively soundproofed the rooms, the outdoor jacuzzi’s been retiled, and the rooms even have air-conditioning now. As Lodge General Manager Rhonda Duggan said, “A lot of our European visitors seem to be more-accustomed to climate-controlled environments. They don’t like leaving the windows open.”

The chalet units have three bedrooms and can be rented in connection with each other (sharing a door), so the resort can accommodate multiple families within a single dwelling space.

As Demetriades said this week, “It’s time to relaunch Mammoth” (thus introducing this column’s theme). “I used to come here years ago and we’d go to Skadi one night and Lakefront the next and then … we started running out of options. Now, we have a lot of great restaurants and a lot of things to do.”

As far as Snowcreek Resort Principal Chuck Lande is concerned, that relaunching is already in progress.

“The Town’s financial woes didn’t scare people away,” he observed. “We’ve seen sales pick up within the past six-to-eight months, which is why we broke ground on another building at Creekhouse a few months ago.”

Creekhouse, located to the west of Old Mammoth Road across from Snowcreek Golf Course, features luxury three-bedroom townhomes ranging in size as large as 3,600-square feet.

“We started Creekhouse about two years into the recession because we wanted to have product available when the market turned around. We built three buildings and ten units total in this initial phase. We have three units left [from that phase]. The main reason I started a new building [featuring four more units] is that the market is picking up nicely.”

The price range for the new units starts in the low 700s.

Creekhouse is permitted for 118 units.

Lande describes his buyers of late as “people who have historically come to Mammoth.” About 70% are all cash buyers.

“Mammoth has a discerning guest,” said Lande. “And I think we [Snowcreek] have a discerning buyer. My philosophy is, instead of fooling ‘em, let’s do it right and build a solid product at a good value.”

None injured in slide

A snow slide on Climax the morning of Dec. 27 closed the top of the mountain for about an hour. As a precautionary measure, ski patrol brought out the transceivers and dogs. MMSA Communications Manager Joani Lynch said ski patrol had set off a slide in the morning prior to opening the top of the mountain at 9:30 a.m. This small slide was evidently an aftershock of sorts.