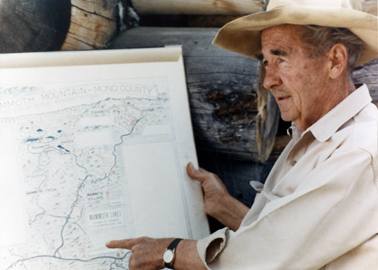 The Town of Mammoth Lakes has been in the tourism business for just about a century. Nascent tourism began with Charles Wildasinn, a lumber man who couldn’t sell his lumber for the cost of transportation. So he built a series of cabins instead and restored an old hotel. Wildasinn sold to the Summers Family who ran a resort in the meadow, supplementing a ranching life with “herding” tourists. By the mid 1920s, a fair village existed in the meadow, about where the driving range and Snowcreek office is today. The water wheel is a remnant of the Wildasinn and Summer’s Resorts.

In 1927, Emmet Hayden procured a lease from Doug Robinson, and the Inyo National Forest. He built the four bedroom log cabin which is still the Museum today. Emmet was very well educated — an Engineer, Surveyor, and Mapmaker. He put Mammoth Lakes on his 1934 map, titled “A Circle of Enchantment.” Originally, the Hayden Map Company did sub-division work in the Glendale/ Los Angeles area. Emmett surveyed the lots, made sure water and sewer went downhill, designed roads and drew up the all important legal maps (boring, if precise). Upon locating in Mammoth Lakes for summer residence, he had the idea of being a hunting and fishing guide. Great hobby, but limited income. So he started making maps of another kind.

I can only imagine Emmett sitting at the table in the kitchen of his cabin, a glass of ‘old granddad’ in hand, thinking: “If I only had a quarter for every time someone asks me where to fish or hunt!” Eureka! He did just that. Emmet launched the Hayden Map Company to produce recreational maps. He supplemented the income of the Map Company by the selling of advertisements or business cards around the perimeter of the map. The maps display a unique and artistic approach. He would do the artwork, then periodically replace the business cards, and change the color of the map to easily spot “old maps” and eliminate “unpaid advertisements.”

The two earliest maps were the “Three Flags Highway” and “The Circle of Enchantment.” He developed a distinct style easily recognized as a “Hayden Map.” This includes a perspective of about 45 degrees looking down from the east, like the view of Bishop from Sierra View near the Bristlecone Pine Forest. It includes detailed trails, roads, streams and lakes, and of course the businesses near all these wonderful recreational opportunities. There are cute little hunters, fishermen, cowboys, deer, antelope, fish, bears, etc. lurking through the field. Emmet had an artistic eye, and an engineer’s sense of proportion. Perhaps he was somewhat bored with two dimensional precise property maps, and longed to show the vision of his ‘mind’s eye.’ The maps are still useful today to explore the backcountry. Only the roads have changed much. Today, the old business cards are useful for historic purposes. Many of these historic businesses continue today; for example the Mammoth Lakes Pack Outfit, in operation since at least 1915, which is the oldest continuous business in town. This list of advertisers clearly demonstrates the historic continuity of the Lakes Basin.

While Hayden Map Company specialized in the Eastern Sierra, there are also maps of detail areas from Lake Isabella to Lake Tahoe. He produced a two sided strip map of the entire Eastern Sierra. In Inyo County there are maps of Olancha, Lone Pine, Independence, Big Pine, and Bishop. Mono County had about four overlapping maps including Mammoth to Paradise, Mammoth to Mono Lake, Bridgeport, and Walker/Coleville.  Emmett also produced custom maps for brochures; for example the Arcularius Ranch and Reds Meadow. On the other extreme were large mural maps, done on multiple sheets of plywood. Emmet turned his talents to profit enough to live in “The Circle of Enchantment.”

Emmet was a CHARACTER. He was only five foot three inches tall, wiry as a terrier, and displayed a nervous energy similar to that dog. He was a heavy drinker, and played a few hands of poker as well. He was also a quintessential outdoorsman, specializing in fly fishing and bow hunting. The family pets were a series of Wire Haired Fox Terriers, Molly, Patsy, and Gerry. It’s true that pets resemble the personalities of their owners.

Margret Hayden was quiet, shy, and retiring. But she was famous in her own right – a great cook who produced mouth watering apple pies in her wood stove. But they were an example of “opposites attract.” They managed to live summers in Mammoth and spent winters in Glendale, chasing the ideal climate and lifestyle.

They built the Hayden Cabin during the Great Depression. It was constructed with minimal money and a maximum of labor — friends and family pitched in. The complex structure is built of local trees and other materials and took 10 -12 years to complete. The Engineer conceived it and the craftsman worked each log to perfection. It was entirely done with hand tools. The careful design created a unique and enduring log building. It is a bit more than a cabin, and less than a palace. It is extremely appropriate that the Hayden Cabin became the local Museum in 1987. The Inyo National Forest owns the Hayden Cabin and land. It is operated by the Southern Mono Historical Society. This museum has many of the Hayden era furnishings, Emmet’s Maps, the tools which built the cabin, and Margret’s kitchen on display. There is also the “Women of the Mountain” display. Stephen Willard, artist and photographer of the area is prominent. And the general history of the Town of Mammoth Lakes occupies a room. We open on Saturday, May 25. We are open daily from 10 a.m. – 6 p.m. Mark and Kathy will give tours and answer questions. The charming creekside setting is an attraction of itself. So come on down to the Hayden Cabin; it’s a free museum, though donations and membership are strongly encouraged. Our new website is: mammothmuseum.org.

The Southern Mono Historical Society has put up a display of the Hayden Maps at the Visitor Center in cooperation with the Inyo National Forest. It is an outdoor display just beside the entrance to the new Visitor Center. These large, creative and colorful maps are wonderful, and this is “The Circle of Enchantment.” Learn more about the Hayden Maps, which put Mammoth Lakes on the map.