While it appears the ski industry recognizes that it needs to cultivate a broader generation of younger skiers and snowboarders, will this be possible, given how corporate ski area ownership and the priciness of resort real estate has rendered the sport unaffordable for most?

The title of an article in the Jan. 25 issue of The Economist said it all. “Old, cold and splurging gold: Who will replace the grays on trays?”

Or that national statistics show that 85 percent of those who try the sport don’t return, and that research indicates that if conversion rates (of first-timers into regulars) don’t improve, overall visitation figures could decrease by 2.5 percent per year to around 40 million visits for the 2020-21 season. -National Ski Areas Assn.

That would equate to a projected one-third drop in skier visits over a decade.

The Mountain Times summed up the challenges to the industry in the introduction to a 2012 story:

“The challenges are many: the recent economic downturn; climate change and erratic winters; an ever-more sedentary society; societal shifts with two-worker families which causes time poverty; school activities that limit the ability of families to travel in winter; more alternative leisure activities; and an aging baby-boomer population …”

So what to do? You’ve got to increase the conversion rate and get more young people interested in the sport – ski areas have to invest in the commons (double entendre), even though they’re all wired to cater to the wealthy

The Economist article talked about the New York State program, where any 3rd or 4th grader from anywhere can ski free with a paid adult.

According to Snowsports Industries America, “A ten-year old is more likely to return to the slopes year after year, and so will spend perhaps $73,000 over a lifetime, whereas a new 25-year old skier will probably spend less than $20,000.”

A silver lining in regard to this year’s drought and the unseasonably warm weather – Mammoth Taxi’s Scottie Marzonie says that the families he speaks with every day have been incredibly pleased with their Mammoth experience. In short, the kids have loved the weather. They’re not cold.

From Julien Lecorps, regarding the Paramedic Food Drive event:

“Whether it’s cut hours, smaller tips or layoffs, tough economic times combined with a low snow year have hit all those in the service industry hard in the wallet.

In order to help those struggling to buy groceries, Mono County Paramedic Rescue held a food drive on Feb. 15 to benefit the Salvation Army Food Pantry on President’s Weekend.

The support and donations from locals and visitors alike was overwhelming and truly heartwarming to see how people off all demographics and income level donate generously when presented with an easy opportunity to help their fellow community members.

Part of the food donations were diverted towards Laurey Carlson, Mammoth Mountain’s Employee Housing director, who has been running her own food bank mostly out of her pocket ever since MMSA had to cut all worker’s hours to 30 hours/week.”

The Salvation Army Food Pantry is open Mondays and Wednesday 2-4 p.m. at  220 Sierra Manor Rd. Food is available for any families or individuals, no questions asked. The Salvation Army is always accepting non perishable food donations and could use volunteers to stock and distribute goods. Contact Roger Barker at 760.935.4873 for more information. If you’d like to donate food for Mammoth Mountain’s employees, contact Laurey at Employee Housing at 760.934.3717.”

So here it is. another week gone, and I still didn’t get the Deb Pierrel write-up done. Maybe I should wait ‘til the filing deadline passes and the dust clears. we’re up to three candidates in the Mammoth Town Council race now, as MLTPA’s John Wentworth pulled papers on Thursday.

I spoke to Matthew Lehman earlier this week about his plans. He said he is 90% sure he won’t run for reelection, but this is down from 98% the last time I asked, so it appears the window is open.

I leave you with this picture of “Team Smokeyard” (see “Business briefs: breakfast and real estate“) because Chef Art wished to have everyone share in the glory. 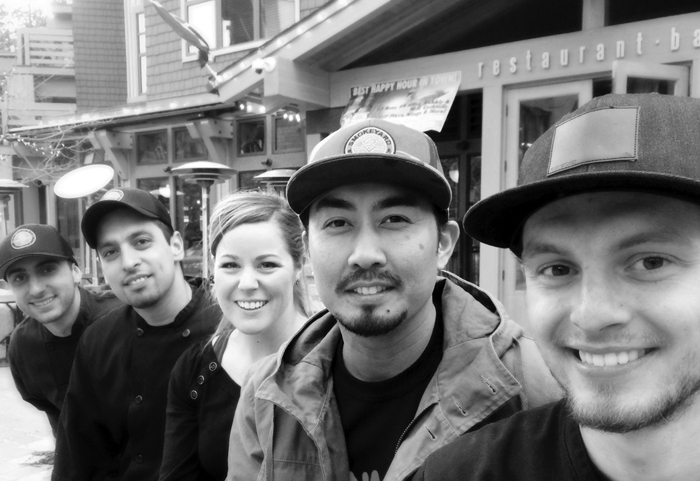