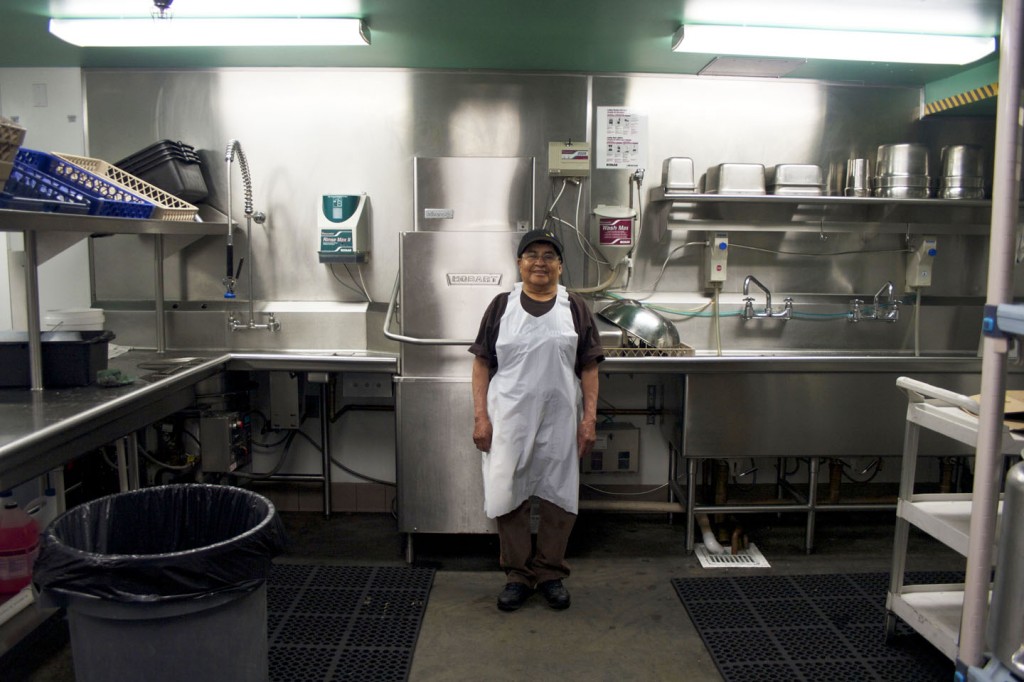 Vicente Flores at his work station inside Toomey’s.

Vicente Flores is a local legend. At 79 years old, the four-foot-tall, bespectacled dishwasher still rides his mountain bike every day to work, clocking in at 9 a.m. on the dot, and working until the clock winds down.

Flores has turned what many consider a stepping stone into a career, tackling his job as a dishwasher with talent and dedication for 25 years. His skill in the kitchens of Whiskey Creek and Toomey’s has earned him deserved praise, and now, after a quarter-century in Mammoth, he’s set to retire and move home to Mexico.

Flores grew up in a small town between Toluca and Mexico City. He moved to Mammoth in 1989 after receiving a call from several nephews working at Mammoth Mountain Ski Area.

“They said, come to work here, so I came to get a job at Mammoth Mountain,” Flores said through translator and Toomey’s cook Martin Guitierrez. Flores began working at Mountainside Grill, soon moving on to Whiskey Creek, where he washed dishes for 20 years.

Flores was perhaps the most recognized Whiskey Creek employee during those 20 years, said Toomey’s Owner and Chef Matt Toomey.

Toomey, who worked with Flores at Whiskey Creek, snatched him up a year ago.

“He’s a total professional,” he said. “Vicente shows up early every single shift and gets ready to go … He even waits at the time clock until 9 and punches in.”

After 25 years of this kind of work ethic, Flores is ready to retire in August.

“I’ll be trying to be busy, working on the house, cutting the trees and doing yard work,” he said. Flores said he will be tending to cherry, pear, and peach trees on his family’s property. However, he has never actually set foot on the property. It’s been 16 years since he was last in Mexico. And although his son offered to email him photos of the new house, “I don’t want to do email,” Flores said.

Before moving to Mammoth, Flores worked in a mine in Mexico, extracting construction materials. “The boss loved me,” he recalled. “When I let him know I was going to leave to America, he gave me money to travel.”

Flores is equally beloved and respected in Mammoth, where he said he can’t bike down the street without being greeted by friends and strangers alike. This level of recognition hasn’t gone to his head; in person, Flores is self-effacing, with an earnestness lightened by laughter.

“I know a lot of famous people; people living the dream, but none are as content as Vicente,” said Toomey. “It’s not what you do, but how you do it … What he does is as amazing as anyone else who runs a business.”

Flores said he’s seen a great deal change in Mammoth during his 25 years in town.

“When I first came in, there were not a lot of people in town,” he recalled. “It was too small. Now there’s more car traffic, more buildings, like the Village. I like it bigger. There’s more to do.”

But Flores has seen another change over 25 years: a decline in the number of people who approach their work with his same level of commitment.

“He did the same thing for 20 years; it’s insane,” said Toomey. Nowadays, few people could conceive of such a thing. Flores said he can only think of “a couple people” with his level of dedication.

When asked how he has managed to devote himself to this line of work for 25 years without going crazy, Flores replied, “What motivates me is the work, nothing else. I work for my family to progress.”

With only two months until his 80th birthday, “If anybody deserves to say, ‘Hey, that’s it, I’m out of here,’ it’s Vicente,” said Toomey.

Then again, he added, now that he knows where Flores lives in Mexico, “We’re going to track him down and try to talk him into staying. He’s part of our family.”

Flores, who seemed equal parts bemused and amused by the interview, just laughed. Although he has been saying for 10 years that he’ll retire, he said, this time he finally means it.

“So many people are constantly searching to be truly happy, instead of just being happy, like Vicente, every day,” Toomey concluded. “He didn’t win the lottery; he doesn’t pull up in a Cadillac Escalade. He rides his bike up here, and he’s the happiest guy I ever met.”