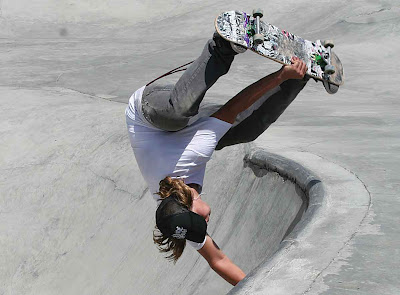 Relations between skaters and bikers are upside down … again. The controversy rolls on. (Photo: Fredericksen)

At a Mammoth Lakes Tourism and Recreation meeting earlier this month, 11 similarly dressed attendees who seemed to have very little experience with local government meetings appeared unenthused to say the least. Clad in hats and skater shoes, they slouched in their chairs, heaved sighs, and listened to iPods to pass the time. However, when the meeting’s agenda turned to BMX bike use of the Volcom Brothers Skate Park, the mood in the room shifted from indifference to animation.
Clearly frustrated, representatives from Mammoth Lakes’ skateboarding community took turns venting their grievances to the Parks and Recreation board. Each claimed that after BMX bikers were allowed equal access to the Mammoth’s skate park in May, the accident rate has risen dramatically.
No one at the meeting spoke up in favor of bike use.
At the park, BMX bikes are silent on the cement, causing a safety hazard, said skateboarder Scott Hoffer. In contrast, a person can hear a skateboard coming. Skateboarder Mike Larry said wearing a helmet reduces a boarder’s peripheral vision, and when he not only can’t see but also can’t hear a biker coming, accidents are more likely to happen. Hoffer said he couldn’t walk for two days after he recently collided with a BMX biker, taking an axle to his shin.
At the meeting, Hoffer stood up and demonstrated how two skateboarders collide, momentarily embracing each other to reduce impact. However, when a boarder runs into a bike, the result is flesh on metal.
The biggest reason accidents occur, skateboarders agreed, is the park was originally built to accommodate skateboards, not bikes. The contours in the park do not provide a safe mixed-use design. Bikers speed around corners, not giving skateboarders much time to get out of the way.
In an interview this week, Jane Baer, who spearheaded the effort to get the park built, said “There are so many reasons why bikes shouldn’t be there – safety being foremost.” Her husband Ken added, “All the money donated and raised for the park was for a skate park exclusively not a combo park. We were very clear when we built the park it was for skaters only Volcom included. No bicycles would be allowed.”
Ken Baer also said the park needs $17,000 in repair work this year stemming from damage to the ‘coping’ along the top edge of the bowl. “I don’t think there’s any question it [the damage] is from bikes,” he said.
At the meeting, boarders presented a petition with 160 signatures asking for Tourism and Recreation to prohibit BMX use of the park. They argued that there are many other places for BMXers to bike in the area, while there is only one skatepark.
Members of the Commission decided the best way to resolve the issue is to create a liaison committee comprised of both skateboarders and bikers. Tourism and Recreation Director Danna Stroud said a short-term fix might be alternating hours that bikers and boarders can use the park. A long-term fix would mean the future construction of a BMX only park.
Dawn True, a mother of two skateboarders, ages 12 and 14, said she worries about her boys at the skatepark. She said she supports the creation of a bike park because she understands not all kids can afford access to the Mountain. Although they identify themselves as boarders, her sons also enjoy riding bikes, and she would like to see them able to do both without getting injured.
Although accidents are a legitimate concern, boarders may be more hypocritical than they appear. Although safety is a central issue, few skateboarders at the park wear helmets. The core problem at the park may be more a matter of staking claim to territory than injury prevention. At the park, clique management is key, and there are those who feel a certain sense of entitlement to the park, willing to yell at bikers who encroach on their turf. Some skateboarders at the park said they yell at BMXers to get out— that they’re not allowed access. On Monday, July 13, The Sheet asked a group of boarders at the park about a couple BMXers using the area that day. The group said they didn’t have a problem, and said it was cool, because those guys were their friends.
Although some of the lines drawn are smudged with subjectivity, the boarders agree that their biggest beef is with tourists. They claim vacationers don’t know the rules and cause most of the accidents.