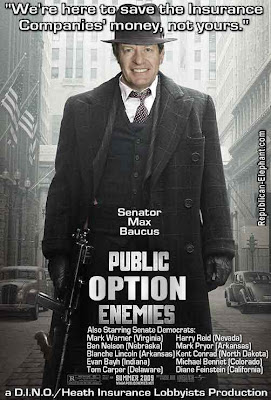 Wow, Sen. Max Baucus (D-Montana) could give Johnny Depp a run for his money. The senator might need to pursue a career in Hollywood if voters oust him over the Healthcare issue. Baucus, a leading Democrat, said earlier last week he isn’t so sure a version of Healthcare will emerge from the Senate with a “public option” provision included. (Artwork: www.republican-elephant.com)

According to a recent American Association of Retired Persons (AARP) sponsored internet poll, if you ask 10 strangers to identify the definition of the “public option” in the health care debate, chances are only four of them will correctly identify it: “A government funded insurance company that competes with existing private insurers to offer health coverage at market rates.” Of the 10 strangers, three will incorrectly identify the “public option” as the British-style socialized medicine.
A more accurate definition of the current “public option” might be: a non-profit insurance plan set up by the government but funded by premiums paid by policy holders, with subsidies for low-and-moderate income people, paid for by a graduated tax on the wealthy.
Oh, my God, what if a person can’t afford the premiums? The country will go broke. Isn’t this socialism? It’s a government takeover. I don’t want a bureaucrat to come between me and my doctor. Private for-profit insurance companies can’t compete with government.
Before responding to some of the knee-jerk reactions filling town hall meetings and the right-wing media, it might be worthwhile to ask why 77 percent of Americans think it’s important: “to give people a choice of both a public plan administered by the federal government and a private plan for their health insurance.”
Why the support for a public option?
Many American who currently have health care insurance are concerned about escalating premium costs. According to a Commonwealth Fund report, from 1999 to 2008 the average employer-sponsored insurance premium, including a family’s share, increased 119% to $12,298. The figure is expected to grow to $23,842 by 2020.
In 2004, half of all people filing for bankruptcy cited medical costs as a reason. In 2008, half of all home foreclosures were due in part to the high cost of coverage and care. And in 2009, due to the recession, job losses, and increased premium costs, over 14,000 Americans are losing their insurance coverage every day.
And of course, there are tens of millions of Americans without health care insurance; a public option is their only option.
Why are so many people afraid of the public option?
One fear fomenting much of the public angst about the public option is the specious argument that government bureaucrats will somehow come between you and your doctor, because health care will be rationed by the economic bottom-line. This fear is predicated on the bizarre idea that a government bureaucrat will attend every meeting a patient has with his or her doctor and reject or authorize medical services. The fact is that public insurance will operate like private insurance, most bills will be submitted after services are rendered. And just for the record, insurance bureaucrats already stand between you and your doctor, rationing health care. To wit: Claims denial rates by leading California insurers, first six months of 2009: PacifiCare 39.6%, Cigna 32.7%, HealthNet 30%, Kaiser Permanente 28.3%, Blue Cross 27.9%, and Aetna 6.4%. Medicare also denies claims.
Another argument being fed to the public is that a government run insurance program available to all Americans, like the proposed public option, would create unfair competition with the for-profit corporate insurance industry since government run public insurance could attract more customers and put private insurance companies out of business, therefore causing a hugh cost burden for taxpayers. To be candid, it’s possible that public insurance might lead to a government takeover of health insurance, but not the whole system. In other words, no one is pushing for the nationalized British system, whereby the government owns the hospitals, employs the doctors and so forth.
It is also ironic that for decades conservatives have denigrated government as being inefficient, incompetent and wasteful and that it couldn’t compete with the “private sector.” But now, all of a sudden, YEEKS! they’re worried that private business can’t compete with government, maybe because a public insurance plan wouldn’t have the high cost of lobbyists, campaign contributions, executives’ salaries and shareholder dividends.
The fear of a health care public options has also buried the fact that we have embraced many “public option” in American life (dare I say, they smack of “socialism”): Social Security, public schools, parks, roads, libraries, and fire and police departments. We also have public transportation, mail delivery, public water and sewer services and public power. How did we ever come to the notion that public programs are un-American or that they don’t build communities or a stronger nation?
Finally, one glaring omission from most town hall meetings is: Is providing health care a moral or ethical obligation? Where are the compassionate conservatives and Christians who talk about the right to life? They believe every egg has a right to hatch, but after birth, compassion ends. We may all disagree on when life begins, but surely if the right to life means anything it means that every person has a right to life, from beginning to end.
“Supporting health care doesn’t make you a socialist or even a liberal; it makes you a human being.” -Rev. Jim Rigby.
Kirk Stapp is a former Mayor and Mammoth Lakes Town Council member. He is also a retired teacher, and most recently the author of “Teaching Iraq.”