According to Jon Regelbrugge Inyo National Forest supervisor for the Mammoth Lakes region, Hot Creek is “… not likely to reopen unless we learn enough about the predictability of geologic hazards associated with Hot Creek that we would be comfortable with some degree of certainty that we aren’t exposing the public to unpredictable and uncertain hazards.”

I’ll translate this bureaucratic double speak, It’s never going to be opened! If Jon disagrees would he provide the scientific data that led to the closing and the measurable data needed to open. That is not possible because you can’t measure “unpredictable and uncertain hazards.” 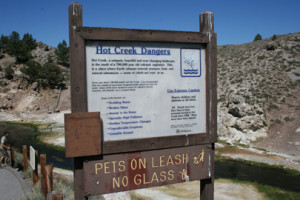 Unfortunately, many people reading this article may have never had the opportunity to soak in Hot Creek, one of the true geologic wonders of California. It was “temporarily” closed in June 2006 due to geologic activity.

There is currently a beautiful display, restrooms, parking, and a ramp with access for people with wheelchairs, all paid for with our tax dollars. In the past, it was a regular stop for tour buses. No more.

That these tour buses were filled with eager visitors who reveled in the unique experience that was Hot Creek …  probably doesn’t matter if your paycheck is from the federal government. Unfortunately, Mammoth’s economy is suffering. In a time when the government is promising more jobs it is unfortunate that one bureaucrat has the power to destroy jobs without a bit of data to support his view. It is also amazing that a special place such as this that handicapped people could access would be so callously taken away by our friend Mr. Regelbrugge and/or his bosses in Washington D.C. 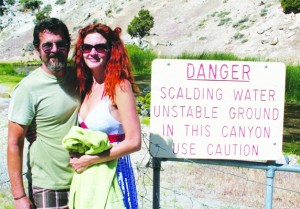 Do these people look like potential law breakers? Los Angeles residents Greg Vernon and Daen Christensen, unaware of the closure, came down to Hot Creek for a soak on Wednesday morning. Christensen told The Sheet she’s been visiting the Eastern Sierra since she was a child. I believe her response was something to the effect of, “Well, that sucks.” (Photos: Lunch)

Our overseer claims he is really only concerned about our health and safety. Maybe. According to Dr. Rick Shedd, senior emergency room physician at Mammoth Hospital, “I have never personally taken care of a patient injured or burned from sitting in a pool at Hot Creek. It is safer now than in the past 40 years that I have been going due to the fences around the hazardous areas.”

As a Public Health Nurse, however, I question the health issues raised by Regelbrugge, wondering about the benefit of a relaxing soak after a stressful day. Isn’t that what the forest is about?

Perhaps Regelbrugge is actually more worried about his health. He might have to do more work to open Hot Creek, adding to his already stressful life living in the Eastern Sierra.

Hot Creek was initially closed to wading back in June, 2006 due to “unpredictable hazardous spring activity.”