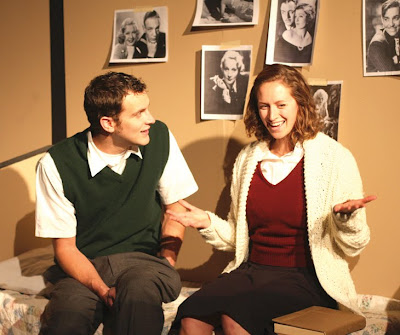 Behind the scenes arts drama; truth stranger than fiction in 2009

The drama that went on behind the scenes in Mammoth’s small, and lately somewhat crowded, arts community was often as interesting its the onstage shows and even inspired the latest Sierra Classic Theatre Murder Mystery, “The Art of Murder.”
First, Shira Dubrovner resigned as Artistic Director of the Mammoth Lakes Arts Center.
Dubrovner cited “fundamental ideological differences” with MLAC’s Board of Directors as the reason for her departure.
A few weeks after her official departure, the Arts Center ended its affiliation with the dance teacher Dubrovner had brought in to run the Brittany Marie Dance Studio, Dennis Wayne. MLAC Board Chair Dave Harvey removed the famed ballet instructor after less than three months on the job, alleging that Wayne was embezzling money.
By summer’s end, both Dubrovner and Wayne found themselves working across town. Dubrovner started the Mammoth Lakes Repertory Theatre, based in the Luxury Outlets Mall on Main Street. Meanwhile, Sabrina Nioche opened Le Centre Dance Studio, where Wayne currently teaches, downstairs from her Movement in Mind Pilates Studio.

And the bands played on …

On a brighter note, even the recession had a hard time putting a dent in Mammoth’s stalwart summer concert lineup. The 21st edition of Jazz Jubilee managed to stay in the black, and Bluesapalooza actually broke attendance records.
And newcomer festival Mammoth Rocks turned out to be a welcome hit, closing out the season on a high note. The day-long concert, which featured local opening acts (such as Jeffrey James and the Wanted Gang), closed with popular headliner Super Diamond, a Neil Diamond cover band that puts its own spin on the singer/songwriter’s material, and is endorsed by Diamond himself, who’s actually played with the band on at least two occasions.
Some visitors said they usually shy away from the concert scene in the Village, but ended up staying the entire day at the festival. (Organizers Matthew Lehman, Betsy Smith and Mark Deeds say they haven’t committed to anything yet, but are considering what may be a bigger, broader followup show in 2010.)

Onstage, live theater had some special highlights this year, such as …
In February, Sierra Classic Theatre’s production of Tennessee Williams steamy Southern drama “Cat On A Hot Tin Roof” was a runaway hit with local audiences. Directed by Dubrovner, Ted Carleton, Chad Langley, Jarrett Smith and Rick Phelps made up the play’s core cast.
Later that spring, Bishop Playhouse 395 staged the ambitious, but spectacular “Joseph and the Amazing Technicolor Dreamcoat.” With a 60-person cast and choir, and 12-piece orchestra, the show was talked about months after it closed.
During the summer, MLRT staged a Black Box Theatre Festival, which drew patrons to see shows such as “Greater Tuna,” “Always … Patsy Cline” and especially “Late Nite Catechism,” which proved to be a big hit with audiences.
In August, SCT partnered with Cerro Coso College’s choir for a musical adaptation of Stephen Vincent Benet’s “John Brown’s Body,” the epic poem said to be the inspiration behind Margaret Mitchell’s novel “Gone With the Wind.” The unique production featured work by Shanda Duro, Chuck Scatolini, Bob Struckman and Margo Canada.
November … MLRT staged its first full-on production, “The Diary of Anne Frank,” in its new space, with an ensemble cast that included Greg Young and Jessica Blum, making her Eastern Sierra stage debut as Anne.
And 2010 is already shaping up to be a brisk one. MLRT is in auditions for the musical “Fiddler on the Roof,” Playhouse 395 heads to the “South Pacific” for its spring production and Kevin Worden is almost ready for “curtain up” on Mammoth High School’s presentation of the Pulitzer Prize-winning 1942 surreal dramedy, “The Skin of Our Teeth,” which opens Jan. 6.