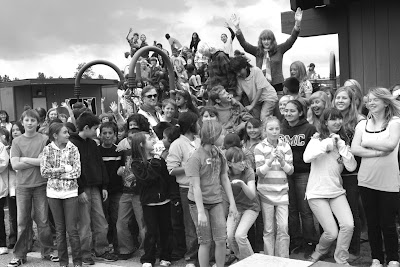 Marley Herrera (Jan. 10): Just a teenager, Marley Herrera is a Mammoth High School student who knows what it’s like to face a life-or-death moment. When the story first ran early last year, Marley needed a new heart, and was in Cathedral City with her mother, Clair, waiting to be placed on a heart donor list. Marley, who’d had a first heart transplant at one month old, had begun to reject that heart and by May 2008, it was clear that another transplant was necessary. She received a new heart on May 20 and is doing fine.

Terrence Mahon (March 21): Run into Mahon on the street or in the grocery store and you’ll think of him as an affable, unassuming guy. He’s not tall and hardly imposing. Upon talking to him, however, you find out why he’s coached some of the best running talent in the world. Mahon, guest speaker for the March 9 edition of Snowcreek Athletic Club’s lecture series, wasn’t there to talk to a roomful of marathon hopefuls or wannabes, but perhaps that’s the whole point of the lectures. Most of us will never run at the level of a Meb Keflezighi or Deena Kastor, but he was a wellspring of ideas on how to improve everything from cycling to golf by integrating some professional training concepts into our own workouts.

Dennis Domaille (May 3): Domaille, owner of the Whoa Nellie Deli and Mobil Mart in Lee Vining, survived being almost scorched to death in a propane tank explosion on July 9, 2008. After a long road back, Domaille gave back to the community that generously lent support and donated so much blood while he was in the hospital and during his recovery. Domaille was a part of the Mammoth Community Blood Drive May 12-14, giving away free fish taco dinners to those who ponied up a pint or two.

Kirk Stapp (May 23): Many readers know Kirk Stapp as a 22-year Mammoth Lakes Town Councilmember, or as a longtime teacher in the Mammoth schools. He has a reputation as a bit of a white-collar brawler, having fought hard as a staunch teacher’s union representative. And as it turns out, Stapp was also a bit of blue-collar brawler, having fought and been wounded in Vietnam. Most people don’t know Stapp did a stint in the military, nor do they know much about what’s really going on in modern-day Iraq, or about the pressure from within the educational system to ignore what’s going on in Iraq. Stapp addresses all these elements in an ambitious and well-conceived first novel, “Teaching Iraq,” which was published earlier this year.

Mary Canada (June 6): The well-known local threw security to the wind and by summer had left for Kenya on a 27-month stint as a volunteer in the Peace Corps. Canada said she began thinking about the Peace Corps in late 2007 when she read a story in the New York Times which reported that the Peace Corps was looking for older volunteers. Of course, “older” isn’t a term Canada prefers. “How about wiser and more stable?” she said with that trademark twinkle in her eye. Canada will serve as a public health care worker in Kenya, educating the populace about such subjects as birth control and HIV prevention. She will initially be stationed in a town of about 35,000 before being transferred to a smaller community.

Sandra DiDomizio (June 27): Every year, the Mono County Child Care Council has traditionally held a dinner to honor and celebrate the County’s childcare providers. This year, the organization threw tradition out the window and threw the first Kidapalooza, an outdoor block-style party for the providers as well as a free family-friendly carnival that, despite some iffy weather, went off like gangbusters on June 13 at Mammoth Creek Park. DiDomizio and her Green Fox Events organized the event, a smash-hit with local families and the community at large, which featured educational-oriented games and vendors, food and a concert by bilingual children’s performing artist Jose Luis Orozco.

Criss Angel (June 27): On his hit A&E Network series, “Mindfreak,” illusionist Angel is known for staging eye-popping, jaw-dropping feats in front of everyday street audiences, as did one of his heroes, the legendary Harry Houdini, on his rise to stardom. For the first episode of its 5th season, Angel and his crew shot on location at what he said is likely the show’s most remote and challenging location to date: Mammoth Mountain. The early summer afternoon was bright and sunny, but there was still a fair amount of snow underneath Chair 23, as an audience of 100 or so fired up locals witnessed the “White Death.” In the never-before-attempted escape, a casketed, bound Angel would have to extricate himself from an ice-cold grave covered by 2.5 tons of snow … or become a notable, but permanent, addition to the landscape.

Dr. Ron Kaylor (July 4): Dr. Kaylor has high hopes of branding Mammoth as the healthiest place on Earth, so he thought he would do his part earlier this year by attempting to break the world record in pole vaulting for someone 65 or older. “The rumor around town is [that I’m] ‘crazy’ Dr. Ron, so I figured I’d live up to it,” Kaylor said. On June 6, he attempted to make his pole vaulting dream a reality and ended up paying a painful price, injuring a shoulder and elbow. A few weeks and he was back to work, but don’t think “crazy Dr. Ron” is out of the big dreams business. It’s a safe bet he’ll be back and “crazier” than ever.

Rasta (Aug. 8): As per angling a-fish-ianado McKenna, “It seemed like every time I stumbled into one of those spots in town where people talk about fishing for trout — coffee and tackle shops, or anyplace you can buy fishing’s sudsy soulmate, beer — I kept hearing the same thing: ‘Rasta’s been slayin’ em at the Lake. He’s practically been putting on a clinic at Crowley.’ Eventually I ran into Rasta, and with a very large smile and a happily nodding, dreadlock-covered head, he confirmed the rumors. Rasta, who works at Rick’s Sport Center, offered to take me out on “the Lake,” as the fishing community calls Crowley (the largest reservoir on the LADWP aqueduct system). Seeing as how I can always use a clinic, fly-fishing, psychological or otherwise, I replied with the kind of calm demeanor my one-and-a-half year old kid displays whenever mom takes fresh-baked cookies out of the oven — I did a little dance and started squealing like a stuck pig.”

Doug Whalen (Aug. 8): Talk about an odd story … this one is something akin to “man bites bear.” Whalen, a 10-year resident of Mammoth Lakes, works at the Sierra Nevada Rodeway Inn and lives on the property in a small apartment just steps away from two dumpsters. Whalen returned home at about 1 a.m. on July 18 and decided to take his 8-year old Shepherd mix, Cink, out for a short walk before bed when the two came upon a cinnamon-colored bear. Cink charged the bear, which took the dog down with one heavy swipe to the back. Whalen jumped on the bear’s back, and nailed it with his knee. The bear was knocked off-balance and soon beat a hasty retreat. Cink recovered from his injuries, no doubt thankful for an owner who’s a “dog’s best friend.”

Eric LeMarque (Aug. 15): Mammoth Lakes resident Bob Drake, a retired geologist, was tromping around the backcountry on the backside of Mammoth Mountain in July when he came across a snowboard. A snowboard? At Pumice Butte? Mammoth Wildlife Specialist) Steve Searles, with a little research, determined that the board may belong to LeMarque, who went off the backside of Mammoth Mountain on February 6, 2004, got lost and still managed to survive eight days before he was rescued. During those eight days, he lost 40 pounds. When he was found, his body temperature registered 86 degrees. Doctors had to remove both of his legs about 8 inches below each knee. LeMarque, now 40, who made good on his promise to snowboard one-year later on prosthetic legs, recently had his incredible, inspirational story published by Random House. “Crystal Clear” was released in April and is already into its second printing.

Dieter Fiebiger (Sept. 5): When Dieter Fiebiger was a young boy growing up in the Bavarian town of Erlangen, life wasn’t exactly fertile ground for dreamers. With Germany in the throes of World War II, dreams had given way to nightmares. But that didn’t matter much to “der junge” Dieter. On that fateful day in 1945, when American and Royal British Air Forces attempted Nuremberg off the face of the Earth, Dieter didn’t run for cover like everyone else. Instead, he stayed outside to watch the planes fly by. Dieter recently celebrated his 76th birthday hiking around the 20-Lakes Basin with his wife of 51 years, Marlene. While most people Dieter’s age wouldn’t even think about hiking around lakes more than 10,000 feet above the sea, Dieter can’t see living life any other way.

Louie Vito (Sept. 26): ABC’s “Dancing With The Stars” included a moment in television (and snow sports) history, as Vito, a pro snowboarder who trains in Mammoth Lakes, waltzed (and otherwise ballroom danced) his way into the living rooms and hearts of millions of American viewers. Vito’s appearance on the show was a surprise hit with viewers, and also showed he’s got some Fred Astaire somewhere in there.

Kathleen Sheehan (Nov. 7): Bishop Police Chief Kathleen Sheehan didn’t grow up with a burning desire to spend a career in law enforcement. In fact, she says, her initial dream was to become a veterinarian.
“But I didn’t have the money for vet school,” she says. “I then saw this ad about becoming a police officer, saw the starting salary, and said, ‘Okay. I’ll be a police officer until I save up enough money for vet school.’”
She fell in love with the job instead.
Sheehan, who spent 25-plus years with the Los Angeles Police Department (LAPD) from 1980-2006, was hired (after an outside recruitment process) as Bishop’s Police Chief in December 2007.
Sheehan’s impressive resumé includes employment by the U.S. State Department overseas for community policing and counter-terrorism efforts, particularly in Indonesia and Pakistan.

Chris Hernandez (Dec. 19): Hernandez, long-time local and popular mixologist behind the bar at Nevado’s, was injured in a skiing accident on Mammoth Mountain’s Upper Roadrunner on Dec. 15. Hernandez apparently hit a snow-covered lip and was catapulted into the rocks below. According to postings on a Facebook newsfeed, Hernandez is still in Reno’s Renown Hospital, where he’s being treated for fractured vertebrae, cracked ribs, a punctured lung and a broken leg/hip. He’s improving slowly, but surely, and doctors are now focusing on fixing his back so he can sit up better.