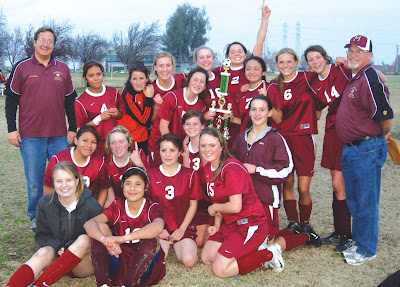 The MHS girls team won the Silver division in the Garces Holiday Soccer Festival, one of the West’s biggest tourney’s, beating McLane 1-0. The girls’ most satisfying win: a 3-0 semi-finals pasting of arch-rivals the Bishop Broncos! (Photo courtesy Tom & Kathy Cage)

Mixed. A pretty good adjective to describe the overall state of local sports in 2009. Depending on what sport you evaluate, there were disappointments (the Mammoth High Varsity football season … or lack thereof) and high points (Meb Keflezhigi regaining former glory). Here are a few collected high- and low-lights …
The Friday Night Lights were mostly dark on Mammoth’s football season this year, due largely to the sudden, rather shocking announcement in early September that there would be no varsity team fielded.
During the fall, High School Athletic Director Scott Luke and Coach James Gray briefed the Mammoth School District’s Board of Education on the chain of events leading to the varsity program being nixed, and talked about their plan to field an 11-man team next season.
Here’s the play-by-play …
April: With the retirement of Coach Tom Gault, a panel of “major stakeholders” meets to find a new coach. “We knew it would be tough to replace Coach Gault,” Luke recalled. The group gives the ball to Coach Gray.
May/June: According to Luke, things were headed the right way through spring practice, but then came a major flag on the play. Practice session attendance began dropping off dramatically.
August: By the first practice of the month, 18 players were not present, leaving just 13 to scrimmage. Timeout.
Ultimately 14 players were deemed academically ineligible. That loss, coupled with some preseason injuries and other students simply electing not to play, left the Varsity with just 13 players.
September: Gray made the hard choice to bench the varsity season. Two 8-man games were played in September, both versus Immanuel Christian.

This past year was one in which Meb Keflezighi’s running career once again caught fire, long after he’d been written off as embers for not making the 2008 Olympic team.
What a difference a year makes indeed.
In November, Keflezighi became the first American since Alberto Salazar in 1982 to win the New York City Marathon. It was also an historic moment for Team USA, with six runners in the top 10, including fellow Olympian and Mammoth resident Ryan Hall, who finished fourth.
The last time 6 U.S. runners finished in the top 10 here was back in 1979.
The win was doubly sweet for Keflizghi, the first marathon victory ever in which he also set a personal best. The previous month, he also posted another personal best and scored a record-setting first place finish in the Oct. 3 running of the Fourth Annual San Jose Rock ‘n’ Roll 1/2 Marathon, where he set a new U.S. 20K record and bettered his previous best time by 25 seconds.
At the start of the race, a large lead group of about 13 did most of the running at the head of the field. By around mile 20, the higher tempo left the lead pack with only 5 runners, but with only 2 miles to go, Keflezighi overwhelmed the field with his relentless pace.
Sportswriters who had previously dismissed Meb due to age and injuries are reconsidering their opinions
Keflezighi spent 1.5 years in rebuild-mode after one terrible November day two years ago, when his body started to fall apart. Already sick just days before the 2007 U.S. Olympic Marathon trials in New York, he cramped up because of dehydration during the race and ended up crawling around a hotel room on all fours because of the pain in his legs. “[He] practically couldn’t get up and walk to the bathroom,” according to his wife, Yordanos. That same day, his friend and training partner, Ryan Shay, collapsed and died during the race.
Months later, a stress fracture was found in his hip. All in all, Keflezighi could have been forgiven for hanging up his racing shoes for good right then and there. He didn’t.
The work paid off big time, with Meb landing plaudits from critics and supporters alike. He also made numerous talk and sports show appearances, and was even a topic of a gag on Comedy Central’s “The Colbert Report.”

The Coleville Wolves 8-man football team continued its streak of formidability, advancing undefeated to the Nevada Division 1A championship game with a 76-0 thrashing of the Tonopah Muckers. At that point, the 11-0 Wolves had outscored their opponents 850-86 on the season.
That championship game, however, didn’t come without a a huge hurdle: the Wolves would have to get past the similarly unbeaten 9-0 Pahranagat Valley Panthers out of Alamo, Nev. Undaunted, however, the Wolves and Panthers both were set to bare their teeth for a high-noon shootout at Damonte Ranch High School in Reno.
It was the Wolves’ first trip to the state finals since 1992. They haven’t won a state title since 1971. And something of a grudge match, too. Fans of 8-man will recall that Pahranagat Valley defeated Coleville 128-74 in a semifinal playoff game last season.
Coleville went in with serious statistics, having shored up a previously anemic defense that allowed 50 points per game in 2008. Not this year. The Wolves held opponents to under 8 points a game this time around.
Meanwhile, the offense was just as hot, led by All-Everything Quarterback Jason Peters, who holds Nevada Division 1A state records for most TD passes in a season, total offense in a season, passing yardage in a season, career total offense and career passing yardage. This year, Peters threw for 1,714 yards and 39 TDs, with no … that’s 0, folks … interceptions.
He also rushed for 23 TDs this season.
The slugfest of a champinonship basically came down to the team’s offense that had the edge on strategy when time ran out, and that went to Pahranagat Valley, which took the game 44-60.

In April, Mammoth Mountain’s Freeride ski and snowboard teams dominated at Copper Mountain, Colo., during the annual USASA (United States of America Snowboard Association) National Championships.
The ski team finished the series of events with 4 gold medals, 7 silvers, 2 4th place results and 6 top 10 finishes. Among notable standouts for the Freeride team was 18-year-old Steven Kutsch (Profiled earlier in the year in The Sheet) and 10-year-old Abigail Hansen who both finished the competition series with the best overall point totals for all events: skiercross, slopestyle and halfpipe.

On May 16 and 17, the Mammoth Storm Girls U16 Soccer Team, ventured to Oceanside to participate in the country’s second-biggest beach soccer tournament. Saturday morning started with 6-3 win. The team then lost 4-2 to a tough Thousand Oaks team of 15 girls that usually plays 2 levels higher than the Mammoth Storm. Mammoth won its third game, however, setting the team up as 2nd place in its flight.
On Sunday, the team played a rematch against Thousand Oaks. Although the game was close in the first 2 periods, this time it was the Storm that dominated the 3rd period, walking away with a decisive 4-1 win. This led to a championship match with the 18-member Moorpark team, whose lineup boasted 3 girls in the over-6 foot, 180-pound range. At the final buzzer, the score was 4-3 Moorepark.

During July 4 weekend, the High Sierra Striders were overwhelemed with a record number of entrants for the organization’s 4th annual Footloose Freedom Mile drew the largest crowd in the race’s history with more than 300 participating, double the 2008 number.
Kastor said the High Sierra Striders team looks forward to next year’s 5th anniversary of the Freedom Mile, where he hopes to get 400 entrants.
And Mammoth High School’s Cross-Country Team hit the ground running, tearing up the course during the North Lake Tahoe Invitational, Sept. 19. The big story: Toby Qualls, who won the Freshman race, besting runners from 21 schools with an 18.46 on the 2.76 mile hilly course around NLT High School. “He’s one tough runner,” said Asst. Coach Tomas Rodriquez, “gifted, hard-working; he’s also a straight-A student.”

A contingent of runners from Mammoth’s own High Sierra Striders club competed in the First Annual Santa Barbara International Marathon and Relay on Sunday, Dec. 6.
The Striders fielded 3 relay teams and had 5 individual runners compete in the full marathon. According to Striders organizers, conditions for the first annual Santa Barbara Marathon were “perfect … 45 degrees at start time, little wind and clear skies.”
And Mammoth High’s Boy’s Varsity Basketball team snapped a multi-year losing streak in its second game of the season with a solid win over Lee Vining 52-39.
“It feels real good,” said 2nd year coach Marvin Orrick, recording his first win. “This was by far our best team effort.”