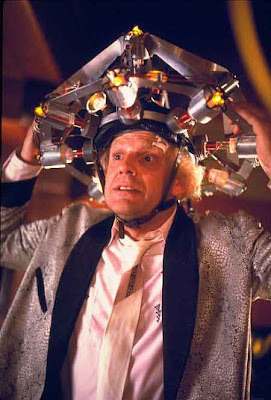 Advice for Council candidate Wood from Doc Brown: “The future is what you make it.” (Photo courtesy Universal)

Former Mayor and two-term Councilman Rick Wood announced Wednesday that he will run for a seat on Mammoth’s Town Council in the upcoming June election.
Three seats are up during this election cycle. They are currently held by Neil McCarroll, John Eastman and Wendy Sugimura.
Wood did not seek reelection in 2006.
In a statement issued Wednesday, Wood wrote, “I will lead the effort to change the way this government does business. No longer will the Council engage in endless debate without conclusion. No longer will this govvernment spend money which it does not have. No longer will the Council represent specific interest groups without regard to the community as a whole. No longer will decisions be made behind closed doors. No longer will Town Staff determine Council priorities.”
The Sheet sat down with Wood Wednesday afternoon to ask him to further elaborate on some of these statements.
In regard to the interest groups, Wood said the Advocates for Mammoth as well as the development community have disproportionate influence simply based on, well, repetition and opportunity. If it takes 27 meetings and workshops (as in the case of the planning process for the Clearwater/Old Mammoth Place) to get something done, interested parties with time on their hands and/or something to gain will comment at every meeting and prevail by sheer volume.
Which brings up the issue of “endless debate without conclusion.” Wood said this Council has experienced a “leadership vacuum … in almost everything.” Establishment of priorities, he said, is oft-stated but not defined.
Each week, a new priority seems to pop up and Staff just jumps from one project to the next.
With four years away from the job, Wood believes he has added perspective as a citizen that will make him more effective, and he says he is committed to bringing disparate groups together.
Sheet: Is there one thing from your first tour of duty which you feel you could have done better?
Wood: Well, there are certainly a couple of votes I’d like back (laughs) … I felt that when Intrawest initially came into Town, I listened, but didn’t necessarily bring those with divergent views inside the tent. I thought I was right … over the past few years, I’ve seen and felt the frustration of those who are on the outside. One can’t assume that just because the majority wants something that the minority doesn’t need to be included.
Sheet: In your statement, you also mentioned hot-button topics like bear management and law enforcement. Would you like to elaborate?
Wood: The Bear Whisperer special on Animal Planet clearly demonstrated what a wonderful opportunity we have via this program to put ourselves on display. There is no more debate as to Steve Searles’s value to the community. As to the details of how he performs his job, I’m not sure about that just yet, but he shouldn’t be relegated to 2nd class status.
In regard to law enforcement, Wood suggested the creation of a Citizen’s Oversight Committee much like they have in the larger cities.
Sheet: I thought we were drowning in committees. I thought you wanted fewer committees.
Wood: True, but there is no transparency [from that department] right now.
Why get back into politics? Wood says he has a renewed passion, and although practicing law affords him a nice living, his heart is still in public service.
“We need to break the [current] pattern,” he said. “Instead of assuming the status quo works, we need to assume that it doesn’t.”