A lot of ideas seem like great ideas … until they’re implemented. Some withstand the test of implementation and are proven to be great ideas. Other times, one is left to wonder, “What the hell was I thinking?”

Mammoth is now applying its CBIZ (Community Benefits/Incentive Zoning) policy to an actual development project (Old Mammoth Place). Some folks, namely Kirk Stapp, are so alarmed by CBIZ that it’s pushed him over the edge (yes, he declared his intention to run for Council on Wednesday).

The genesis of CBIZ policy is rooted in the recession, which brought development to a screeching halt. Some believe the halt was exacerbated by the prohibitive cost of doing business in Mammoth in the form of high developer fees.

In fact, previous councils have famously boasted that Mammoth’s development impact fees were the highest in the nation.

Lately, however, Mammoth’s Council has not only ratcheted back fees in a stimulus effort, but it has also sought to give developers the opportunity to create their own benefits packages.

This way, if a developer has to spend money mitigating development impacts, at least he can do so on items tailored to his own site/neighborhood – as opposed to paying a mitigation fee that may be used to pay for an unrelated project across town.

In the case of Old Mammoth Place, developer Jim Demetriades has promised community benefits which include a public plaza, commercial space, convention space, underground/understructure parking and a “mid-block connector” which will connect Old Mammoth Rd. to Laurel Mountain Rd. (now the driveway to Sierra Nevada Lodge).

A consultant hired by the developer then analyzed the value of these benefits.

This analysis was peer-reviewed by a consultant hired by the Town.

Both agreed that “the dollar value of the physical benefits included in the proposed project is estimated at $26.2 million (in 2009 dollars).

The Town’s consultant, Walter Kieser wrote in his analysis that he would expect “that a project of this nature would produce significant net fiscal benefits to the Town after taking into consideration its incremental service costs … the proposed project will create significant physical amenities above and beyond what would be required by the Town’s existing codes and regulations.”

Mammoth’s Community Development Director Mark Wardlaw agreed with this assessment during an interview on Wednesday. “Yes, I think the project’s a good deal [for the Town].

You can’t hope a Village will be successful. You’ve got to make it successful. The same holds true of Old Mammoth Road,” he added.

Former Councilmember Stapp, however, is not so sanguine about the deal. He thinks elements that used to be required are now being redefined as benefits.

He also thinks the whole deal may be illegal.

Yes, we may be getting a $26 million jewel, but in the process, we are perpetrating a wanton disregard of our own town codes.

The deal for one set of goodies means another set of priorities are ignored, and the consultants did acknowledge that as part of the CBIZ deal,  the Town would not collect a combined $6.5 million in development impact fees and housing mitigation fees.

So ultimately, says Stapp, you end up having to backfill those obligations in some manner.

And what about all the loans made to the DIF fund in 2008 and 2009 to ensure the completion of existing projects (like the Lake Mary Bike Path). Town Manager Rob Clark and Finance Director Brad Koehn assured everyone that the Town would repay these loans as soon as the next big project broke ground and the DIF spigot opened once again.

In this case, it appears the DIF spigot gets opened, but only to water a different lawn.

Meaning that $3.2 million “loan” from the Village parking structure fund remains outstanding. And that all the money “borrowed” from various pension funds and vehicle funds doesn’t get paid back.

And some of that DIF money is supposed to be dedicated to transit and trails, continued Stapp. When we passed Measure R for example, he said, the promise Council made was that money raised by the measure would not “supplant” revenue dedicated to trails from other sources.

It appears “supplanting” is occurring here.

As for the $26 million benefit number, Stapp doesn’t believe it. He thinks the economic analysis done was half-ass.

He may have an argument here. The analysts calculated that an additional dedication of 248 units of density on the property would only increase the land value of the parcel by approximately $2.5 million. That amounts to about $10,000/unit. Really?

Then there’s the height issue. Both Town Staff and the developer say there was a mutual oversight about how height would be calculated on site, which is why they’re proposing that on certain portions of the site, the developer get 55’ above a 9’ parking structure max to = 64’

Councilman Skip Harvey, for one, doesn’t believe a word of it.

Sheet: Do you believe this was a mutual oversight?

Harvey: No. Staff spends more time circumventing code than enforcing it. I specifically asked Mark Wardlaw how height would be measured. He replied it would be measured based upon the formula we use from natural grade. There was no indication that we were amending how we measure height as outlined in our codes. Which reads (Skip was adamant about bringing a copy of the code over for reprint):

1. Structures on lots with zero to ten percent average slope, no portion of a building may exceed 35’ as measured from natural grade.

2. Structures on lots having an average slope of ten percent or greater: Maximum building height shall not exceed 35’ as measured from natural grade, at any point, to the top of the roof above where the measurement is being made.

3. No portion of any building shall exceed 55’ in height as measured from natural grade at any point beneath the structure to the roof of the building above that point.

4. For any commercial structure where the majority of the ground floor is devoted to understructure parking, the planning commission may approve an increase in height of up to ten feet subject to a use permit.

Mayor Neil McCarroll disagrees with Harvey on the height issue, as he says economics dictate understructure parking and five stories. But as to the density issue, McCarroll said CBIZ was structured so that developers would work up from base density, not just start at 80. He does not favor the developer’s request for double density.

While The Sheet had Harvey in the office, we asked him about the looming negotiation with the employee unions over the furlough issue, as staff is eager to restore the workdays (and salary).

“I feel management is more interested in having a good relationship with its staff than in taking care of the needs of the community,” was Harvey’s measured reply.

You know what’s funny? That every month Town Staff presents these silly “monthly economic forecasts” to Council which do nothing but obscure the real structural (and local) issues with the budget – notably pension obligations. Our budget issues aren’t just about macro issues like GDP.

You can bet no mention was made of a March 1 article in the Wall Street Journal that mentioned that CalPers (the giant pension fund for California government employees) is considering a reduction in its projected rate of return on investments from 7.75% to 6%.

“The percentage is an important factor in calculations by CalPers officials of future contributions needed from employees and local governments to cover payouts.”

What did Harvey just say? 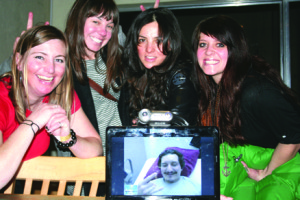 From the organizers: “Once again, this community rallied behind one of our beloved locals in a time of need. Four hundred Chris Hernandez supporters joined together in the Mountainside Conference Center at Mammoth Mountain on March 1!  This event was the most wonderful portrayal of true Mammoth spirit and a perfect example of what makes this community one of a kind!  Attendees reached deep… very deep… including pulling out rolls of quarters to fund the cause!  Together we raised enough to help Chris and his family through three weeks of rehabilitation!  On behalf of the Hernandez family, thank you, Mammoth Lakes, for your love and support!  We could not have done this without you!

“For those of you who were unable to attend, but would still like to support the cause, t-shirts will be for sale at Stellar Brew on Main Street. Monetary donations can be sent to the Mammoth Community Foundation at PO Box 1394, Mammoth Lakes, CA 93546.  Checks must be made payable to ‘The Mammoth Community Foundation’ with ‘Chris Hernandez Fund’ written in the Memo. Thank you!!!”

Roger Hougland, a resident of Mammoth Lakes for 34 years, passed away Feb. 24. He is survived by his wife Cindy, daughter Monica (Jess Lockwood), Grandson Barrett, sisters Gail Susskind and Vicki (Roger Hillard), nieces and nephews, Andrea and Lindsay Susskind, Jake, Mathew, and Andrew Gonzales, and his many friends everywhere throughout the years who were always a very important part of his life. The family invites you to join them in a celebration of Roger’s life on March 13 from 6-7:30 p.m. at Canyon Lodge in the Cloverleaf room. Please bring smiles and stories to share. In lieu of flowers, please make a gift to the charity of your choice.