ESUSD Board of Directors and Superintendent Don Clark (Photo: Kirkner)

Board to review other potential budget cuts at Wednesday meeting

On the agenda was a resolution to make a decision about whether or not to send out pink slips to eight teachers in the District by the March 15 deadline legally imposed on schools by the State. The issue, however, had been blurred by the fact that the original resolution that had been circulated also called for the closure of three schools in Mono County. Even though the school closure language had been removed from the resolution in an amended version, the public was still wary of the District’s true intentions.

According to Denison, the District had started the fiscal year with a “wait and see attitude” regarding potential deficits to the budget. “We didn’t make changes to things like transportation because of our healthy 25 percent reserve,” she said. “If cuts were to be made we figured we do it later; we figured we could weather it for now.”

Usually only carrying about a 4 percent reserve, which is what they are required to carry, the District was feeling comfortable with their surplus and seems to have taken their eye off the budget ball. Community members Friday night wanted answers as to how and why this could have happened, especially when, as Mono County Supervisor Hap Hazard stated, property tax shortfall information has been made widely available by the County. Property tax apportionments are given to each school district. The shortfall this year for ESUSD left a $500,000 gap in the budget – just one of the factors making up the deficit.

“A shortfall now does not compute with me,” Hazard said. In response to one of Denison’s comments that the County had deposited the District’s apportionment early but had not notified the District so they were unaware until mid-January that there was a shortfall, Hazard added, “It bothers me that it created a problem that the apportionments were early. You need to hold financial responsibility within your own walls, don’t shift it back to the County.”

The budget chaos began on Tuesday, March 9 when Resolution 10-06 was released calling for the pink slipping of eight teachers (in addition to six that had been pink slipped in February) as well as the closure of three schools in the Mono County District. The schools listed were Lee Vining Community Day School, High Desert Academy in Benton and the Eastern Sierra Academy in Bridgeport. The resolution was received with such contempt that by Wednesday morning it had been revised. The revised version was essentially the same resolution with the last line about the school closures removed. But the damage had already been done.

“Amending of the resolution seems to be more political than substantial,” stated June Lake resident Ann Tozier. “The end result [of closing schools] is still underlying.” 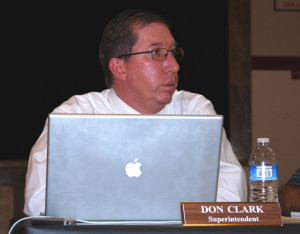 Several members of the public called for the resignation of Don Clark, ESUSD Superintendent after a huge financial crisis was revealed within the District last week. (Photo: Kirkner)

Clark, who was the subject of a lot of finger pointing and several calls for resignation, only spoke once throughout the evening.

“The meeting tonight is just about the March 15 deadline,” Clark stated, trying to bring the crowd in the gym back to the pink slipping issue at hand. According to State law, teachers have to be notified by March 15 each year if there is any chance their job is in jeopardy. Schools are not allowed to lay off positions later in the year if they have not sent out those pink slips by March 15. Therefore, by approving the issuance of the eight pink slips the Board would have a guaranteed way to cut budget spending next fiscal year. It would give them some leeway. However, if by some miracle the budget did not need to be cut as much as they anticipated or if cuts could be found elsewhere, the pink slips could be rescinded.

Nugent, however, claimed the pink slips were just part of the looming budget deficit problem. Resolution 10-06 “doesn’t take care of all the budget issues, it’s just a piece of the puzzle,” Nugent said. “More cuts will need to be made.”

According to Denison, if all 14 positions were cut (including the six that were pink slipped in February), $1.2 million would be saved. At the meeting, the deficit was reported as at least $1.8 million. Prior to the meeting it had been reported at $2.2 million. See previous story on thesheetnews.com that explains how the District got into this predicament in the first place https://thesheetnews.com/archives/1671

On Wednesday, March 17, the Board will receive the second interim budget report. Once they have the official numbers in front of them they will be able to begin to review where else they could make cuts other than teacher salaries.

The public suggested looking at sports programs for funding cuts, among other things. They also asked to be allowed to be involved in the budget decisions and discussions going forward.

By the end of the evening, the Board and Clark had taken a beating, but still voted to approve Resolution 10-06 against the majority of the public’s will. The Board again amended the resolution and added three more positions to the list of teachers who would be receiving pink slips come Monday morning.

Added to the list in the Board’s motion was Music 1.0 FTE; Spanish 1.0 FTE; and PE 1.0 FTE making it 11 rather than 8 pink slips that would be sent out. This brings the total to 17 pink slips including the six from February.

The suggestion to add more positions to the list came from Board member Doug Northington, who asked Nugent and Denison how they knew eight slips would be enough.

“The pink slip deadline is Monday, but we don’t get the second interim report until Wednesday, so how do we know we won’t need to cut more,” he asked.

Nugent replied that more could be added to the list as long as they were specific. She claimed that a blanket pink-slipping across the district, as many members in the audience had requested on Friday evening, would not work because position cuts had to be tied to specific projects or classes.

“To pink slip everyone we’d have to say we are eliminating all programs and all classes [in the District],” Nugent said. “I don’t think you understand the implications of what you are asking,” she said, addressing the audience.

The Board will meet again on Wednesday, March 17 at 6 p.m. at the Lee Vining Elementary School to review the second interim budget report.