As of Sept. 7 this rogue Lakes Basin bear was still breaking into cabins. (Photo: Tom Keller)

What a difference a day can make, especially when it comes to bears in the Eastern Sierra.

Two, completely unrelated bear issues that became heated over the holiday weekend landed before the Wildlife Subcommittee at its Sept. 7 meeting.

Don Jower, the visiting artist who had the unfortunate encounter with a bear Saturday night at the Labor Day Festival of the Arts, appeared in a grave mood. 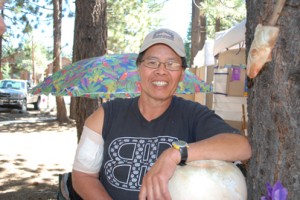 Don Jower was not smiling when he came before the Wildlife Subcommittee on Sept. 7 (Photo: Kirkner)

Jower had accidentally surprised a bear while it was feeding on food left out by a vendor. The bear, in its efforts to get away quickly, bit Jower on the bicep and knocked him into a picnic table.

On Sunday Jower did not believe the injury was a bite. He told The Sheet that the mark on the front part of his bicep was probably from a claw and the backside injury was from the table he fell on. Jower’s mood was light and he did not seem overly concerned by the incident.

By Sept. 7 when he came before the subcommittee he was certain that it was a bite and had already begun a series of rabies shots. The cost incurred from these shots had soured Jower’s mood from the light-hearted attitude he exuded on Sunday.

Jower admitted to the subcommittee that after the attack he didn’t think he had been bitten. He had to be encouraged to even go to the emergency room to get the wound flushed and cleaned.

As he addressed the subcommittee, Jower never stated what had changed his mind except that he’d had time to think things over in the past day. During his thought process he had also come to the conclusion that the Town’s Wildlife Specialist Steve Searles had not been doing his job.

“I wanted to blame the vendor [Hawaiian Delight] at first, but he’s from L.A. and he doesn’t know anything [about bears],” Jower said. “Why isn’t Steve being proactive?”

Jower felt that Searles should have been going around to all of the vendors and adamantly saying “this is what you have to do” to keep wildlife away. He claimed when Searles spoke with him on Sunday about the incident, he did not introduce himself as the Town’s Wildlife Specialist and also did not explain that the camera crew with him was from Animal Planet.

“I thought Steve was from DFG making a video for documentation of the incident,” Jower claimed. When he discovered who Searles actually was he started to believe the bear man was working under two agendas: the Town’s and television’s.

“I feel like I’m an experiment, something good for T.V.,” Jower said. “I’ve been left out on an island, left to my own devices. Nothing’s been done for me. I have incurred a lot of expenses and no one from the Town is saying anything.”

Councilman John Eastman, who was running the meeting, apologized for not reaching out to Jower. Eastman said he had just heard of the incident that day.

“We should have done better communicating with you,” Eastman added. “We will be more stringent after this incident.”

A flurry of members of the public voiced their opinions about the incident, including Leigh Gaasch. “I have been talking about bear issues for the past three years, why didn’t you listen to me,” she asked. “Steve should have been patrolling the festival 24/7 so that something like this would not have happened. Why weren’t you proactive? Why’d you have to wait for it to happen?”

“I guess because we’re not all clairvoyant like you,” Eastman quipped as she took her seat.

Eastman stated that now that this incident had happened it needed to be addressed. The subcommittee agreed with festival organizer Gaye Mueller that a meeting should be held to update the information and policies distributed to event organizers and participants. The meeting, once scheduled, will include the Mono County Health Department.

Another member of the public Jack Durnford, an artist as well as a hunter, stated that he was at the festival on Saturday night when the incident occurred. He claimed later that night he saw Searles baiting bears in order to get them to come back so that the camera crews from Animal Planet could get footage. He also said that Searles had shot rubber bullets at another bear that was sleeping in a culvert doing nothing wrong.

Searles later explained that he had been asked to shoot at this sleeping bear in order to get it to leave the festival site. It was thought that it would be better to have zero bears in the area, sleeping or not, after what had happened on Saturday night, Searles said.

Seemingly fed up with the attacks on Searles, members of the audience from the Lakes Basin, as well as a member of the Animal Planet camera crew, came to his defense.

“Steve was in no way baiting the bears for the camera,” said John Jopson, of the Animal Planet crew. “He was waiting for the bear to come to the dumpster so he could discipline the bear.”

“If you wonder why Searles wasn’t patrolling the festival 24/7 it’s because he was up in the Lakes Basin helping us,” said Lakes Basin cabin owner Sally Fisher.

Fisher was referring to Searles’ attendance at their Crystal Crag Water & Development Association meeting where he spoke to Lake Mary cabin owners about what he could, and could not do to help them with the 3 and a half year old sow that as of Tuesday’s meeting had broken into at least 13 cabins, tearing off shutters, breaking windows and peeing all over interiors.

The cabin owners attended the Wildlife Subcommittee meeting to find out what the Town could do to help them with their situation. The Town’s response, however, was very similar to what Searles had told them last Saturday.

“The Forest Service is the cabin owners’ boss, if you will,” Eastman said. “So it causes a bit of a predicament.”

“All we want to know today is who to call and what they can do,” said Jenny Smith, a cabin owner in the Lakes Basin for 50 years. “We’ve done everything we know how to do and we still have a rogue bear.”

Eastman said that they should call the Mammoth Lakes Police Department for response, to which Police Chief Dan Watson agreed.

“Then you need to formulate communication with the Forest Service to get a response from them,” Eastman added.

This however did not alleviate the homeowners’ concerns. It was their understanding that while the police could show up they were not allowed to do anything to the bear unless a human life was in danger.

Watson corrected this. “The police can use non-lethal measures on Forest Service land,” he said. He explained that the situation last Friday where the police and Searles were allegedly told by the Forest Service to stand down as the bear was wreaking more havoc was due to a “breakdown in communication.”

“I was out of town and so I am still gathering information on what happened,” Watson said. He was waiting to hear back from Forest Service officials.

Sergeant Karen Smart added, “If a Forest Service Law Enforcement Officer says stand down, then they have the ultimate authority and the police have to stand down.” This is true for all law enforcement situations on Forest Service land, she said.

Bear-With-Us Executive Director Marianne O’Connor encouraged the cabin owners to contact officials in Washington D.C. and offered to help them do so.

“If the community makes enough noise then something will happen,” she said.

“If the cabin owners are experiencing property damage then the Forest Service can facilitate contact with DFG,” Regelbrugge explained, “but we are not under contract to protect private property.” He added that a Forest Service officer had tried to contact DFG last Friday and had been told by the DFG official that the Lakes Basin bear was not a public safety bear at that time. It was only considered a property damage bear. According to Regelbrugge, this means that if the homeowners want the bear destroyed then one of them needs to file for a depredation permit. According to Fisher, three permits had been filed as of Wednesday.

In regard to the Friday, Sept. 3 incident where Searles had stated that the MLPD officers and himself were told to stand down and leave the scene by District Ranger Mike Schlafmann when the bear was still in the Lakes Basin area, Regelbrugge stated that the Forest Service is fully supportive of the MLPD and has never tried to stop them from doing work on Forest Service land.

“I would be very surprised if Schlafmann had told them to stand down,” Regelbrugge said. He re-iterated a previous comment from Sergeant Smart that Searles is simply not allowed to discharge a weapon on Forest Service land because he is not a sworn officer and therefore would be violating federal regulations.

A call to Police Chief Watson on Wednesday afternoon cleared the issue up even further.

“To my knowledge Mike Schlafmann was never even contacted [during last Friday’s incident],” Watson said. “If anyone is saying that the MLPD or Steve were told to stand down it is absolutely untrue.”

According to Watson an off-duty officer had contacted him last Friday during the incident. Watson mentioned a depredation permit, but since the bear was not a public safety bear at that time, putting it down was not necessary.

Searles, in a phone call Wednesday afternoon, conceded to what the Chief had said.

“I made the assumption it was Schlafmann, but I was unaware of the chain of command,” Searles said. “I am in complete agreement with the Chief.”

Back at the meeting, Searles asked the subcommittee that if possible, he be allowed to put the Lakes Basin bear down when the time came. “I would like to be the one to shoot this bear so that it is properly identified,” he said.

The next Wildlife Subcommittee meeting is scheduled for Sept. 21 at 2 p.m. in Suite Z.