Bishop students left a pile of manure in front of MHS this week as a calling card for Friday’s high school football matchup. (Photos: Lunch)

The Huskies (2-1) are led by first-year head coach Marty Thompson (MHS class of 1988). Thompson took the reins this year from the venerable Tom Gault, who now serves as an assistant coach, motivator, tactician — essentially, Gault is the Godfather of Mammoth Football. When I asked Thompson if Gault would ever retire, Thompson replied, “It’ll be on an in-route past the headstone.”

Thompson’s defensive coordinator is Jason Patterson, who played college ball at Central Washington. Patterson certainly has the coaching pedigree — his father, according to Thompson, was a renowned basketball coach. Fittingly, Patterson will take over the MHS Boys Basketball program this winter.

Offensively, Thompson said the team has moved the ball well in its two wins (22-18 over the Minarets Mustangs and 28-24 over Calvary Murrieta). At the controls is Junior Quarterback Tyler Wormhoudt, who has thrown for 5 TDs. The team’s leading rusher is tailback Oscar Hernandez, and the top receivers are the Hamilton twins (Alex and Ricky) and Seniors Tyler Wallasch and Eli Martin.

Wallasch is the team’s leading tackler. 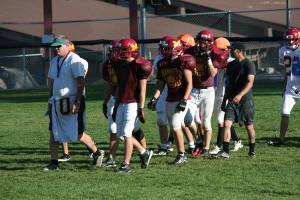 MHS Head Coach Marty Thompson (left) leading his troops through their paces at practice on Wednesday.

When asked about his offensive philosophy, Thompson said, “We like to play to our strengths. This year, we’ve got a good QB and receivers, so we’re throwing the ball more.”

While the Huskies don’t have a lot of size, a trip to the practice field shows that the program is on the upswing, with nearly 50 players between the JV and varsity rosters. Thompson attributes the rebound in interest to a few factors. First is a positive atmosphere. The focus is on teaching versus pressure. And this group of kids, which Thompson says excel both athletically and academically, appear to thrive in that environment. Second is winning, which tends to breed participation.

Certainly, Thompson’s commitment to the team can’t be lost on the players, either. A Mammoth Lakes Police Officer, Thompson, a father of three, works graveyard shifts during football season in order to allow him to coach. “The MLPD has been very accommodating,” he said.

MUSD Superintendent Rich Boccia’s enthusiasm for the program also doesn’t hurt. “That he’s a huge New York Yankee fan … is a problem,” deadpanned Thompson, “but you’ll see him down on the field. He’s very supportive.”

“We definitely have a chance to get to the playoffs,” said Thompson. “This is a never-say-die team, and when we leave the field, we want to let ‘em know they played Mammoth.”

Friday’s games will be played at 4 p.m. (JV) and 7 p.m. (Varsity) in Mammoth at Gault-McClure field. Look for postgame coverage at www.thesheetnews.com