This is a free race to all Mono and Inyo County kids, race team kids and their siblings. Each competitor receives a t-shirt and trophies are given for first, second and third places. The race is a qualifier in the morning based on time and then a dual head to head elimination in the afternoon. The elimination races start in Horse gates that open at the same time for the two competitors. The clock starts at the finish when the first racer goes through the timer and then the second racer stops the timer. This creates the time differential between the two racers.

Exciting racing was visible all day with lots of upsets, a firm course that was tricky over the knoll and a never-give-up attitude before the ultimate winners were crowned.

In the boys 9/10 the fastest qualifier of the day was Tommy Teslaa who was upset by Elan Preis in the semi finals while Charlie as the second faster qualifier pushed through the field to hold off all contenders to take the win. The crash of the day came in this age group when Cole Callin went down in the round of 8 and needed a major reboot.

The girls had similar upsets when the fastest qualifier Kendall Lach went out to Jade Steiner and then the 2nd fastest qualifier Anastasia Seator-Braun washed out to Nikki Sadat. The key to this race was Alexandra Garcia who did not lose one race all day en route to capturing the title. Nikki Sadat had to settle for 3rd after facing Garcia however in the consolation round Sadat had to come from behind to best Cheyene Assil who won one of the runs.

The boys 11/12 category showcased some of the most impressive ski racing at any level. The competitors were in shape, skied precisely at each turn and it was down to the wire for each of these competitors.

Again the first upset was Lachlan Anderson defeating Sam Richau the fastest qualifier only to fall to James Gooch; the 2nd fastest qualifier, in the consolation round. The real story came from the middle of the pack where Duncan Reed and Erik Eisen took on all competitors. Both skied so well they amazed the crowd and dazzled the announcer. In the finals it was clear that the Blue course was the faster of the two when on the first run Reed defeated Esien by .505 seconds. On the second run Eisen defeated Reed by .433 leaving a total time differential of .062 seconds between these two racers and the win for Reed.

Finally when you thought it could not happen any more the upsets kept on coming when Eva Yguico (3rd place) the fastest qualifier was upset by Delany Kearns who went on to finish 2nd. While the 2nd fastest qualifier in the morning Sarah Ellis somehow held off Mack Carkeet and then Delany Kearns after losing the first run to Kearns by .023. With all the pressure on Ellis she came back in the second run for the win and championship.

The weather was great, the conditions perfect and the athletes gave all the spectators a full day of ski racing excitement. The coaching staff, headed by Lindsey Barksdale, has these kids in mid-season form and ready for the racing yet to come. Thanks go out to all the coaches Treat, Shenkel, Hotinsky, Berrey, Morning, Wood, Anderson, Falkingham, Hicks and Wesner. A special thank you to the snow making crew and cat crew who made it all possible, see you all in February for the 2012 Kittredge Fun Cup. 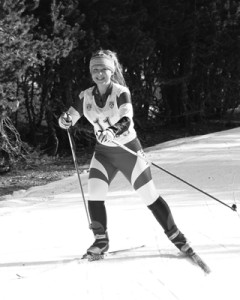 Tamarack and Mammoth Mountain staged a fun Nordic Freestyle Uphill Sprint event on Sunday, Jan. 8, that took the racers all the way up to 9,173 feet. While some snow-starved Nordic athletes from the Tahoe area drove 6-plus hours to race on snow in Bend, Oregon, Mammoth Nordic locals and visitors were able to test their skills and fitness on the “Minaret Mile” near the Main Lodge.

Thanks to the efforts of Ueli Luthi and team in setting an incredible race course, the snow was in good condition and the course was challenging. Racers, ranged from 3 to more than 60 years old, and left the starting area individually on an interval every 30 seconds.

Each starter pushed off in a full sprint, attacking the 1.5km uphill course until they crossed the finish line at the top of the Minaret Mile near the Red’s Meadow Forest Service station. After the times were tallied, awards were given out back at the start line near the Chair 12 road.

Congratulations to all the participants who took part in the sprint challenge!