Gary Katz is the Principal of Downtown Capital Partners (based in Tarrytown, New York), a firm which specializes in the trading of distressed debt.

In essence, he loans money to bankrupt companies.

He is a former bankruptcy attorney for Skadden Arps, a prestigious New York City law firm. He is also a graduate of Harvard Law School.

In short, while not an expert in municipal bankruptcy, it’s familiar territory. And as a Sheet subscriber, he has followed Mammoth’s legal travails with interest.

And he is very dubious about Mammoth’s ability to get into bankruptcy.

As he said via a telephone interview this week, “Bankruptcy is not something that happens overnight or as a result of one or two problems.

“Everyone tries to blame their troubles on just one thing, but if you look deeper,  you’ll find it’s the culmination of years and years of mismanagement and neglect. At worst, the mismanagement is deliberate. At best, it’s just basic incompetence.

“Orange County’s bankruptcy [in the ‘90s] was a unique Madoff-type problem with bad derivatives trades … But generally, there are municipalities around the country that have made errors similar to Mammoth’s. And the vast majority of them have not filed for bankruptcy. They make painful political decisions. Careers are ruined. But they take their medicine and move on the best they can.

“If you have 10 cops and have to fire eight of them, or shut down your only hospital or fire department, that’s one thing, but if you don’t have to do that, you’re just the victim of really bad decision – both about the proposed project and then in not reaching a settlement in regard to the judgment.”

As Katz said, the strategy (some of which the Town has used) is to cut your budget and then threaten bankruptcy to negotiate better terms. While acknowledging he has limited knowledge of the case based simply upon newspaper reports, he gave this best guess:

“Thirty million over 15 years at 4% interest would be a great deal for them [the Town]” he concluded. 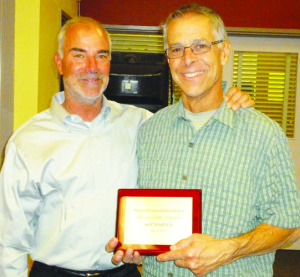 Thought the Skip Harvey recognition as a “Friend of Public Education” was fairly hilarious. The Ice Rink deal has to go down as one of the Town’s greatest financial boondoggles, and the entity that ate your lunch, Mammoth Unified, has the nerve to reward you for being a dupe … and you accept!!As Rich Boccia said when presenting the plaque: “I had the opportunity to work with Skip, who was Mayor at the time, and he helped us through headaches and challenges, but also took the time to introduce me to the Council and many wonderful townspeople,” Boccia recalled.

“I’m honored,” Harvey stated. “[The ice rink] was a collaborative achievement, and a huge step, especially for the kids. I’m very proud of that.”

As far as the air subsidy issue goes, it’s time for Rick Wood to look in the mirror, make the tough decision, and tell his fellow runners that funding for the Whitmore Track Project will have to wait. That $450,000 pledged to the track project is needed for the air subsidy. We can’t fund both. We’ve got 25 years and untold millions invested in the airport. Operate it or shut it down. And have the balls to defend that decision either way.

At the very least, give me some financial analysis showing me that building a track will drive more business long-term than continued air service. Then again, I cringe at the thought of Council contracting out another $500,000 consultant. Never mind.

In our recent follow-ups from the Town’s budget balancing measures and passage of the 2012-2013 fiscal year budget, one thing that escaped mention (until now) is some errant data in an attachment to a budget balancing Agenda Bill that has since been corrected by the Mammoth Lakes Police Department.

Chief Dan Watson said that instead of losing two sworn police officer positions as a result of the budget that was approved by the Town Council on June 20, the MLPD will lose only one officer.

After that report was prepared, the Police Officers Association (POA) agreed to additional concessions totaling more than 16%, according to Chief Dan Wason. The cut position is for Traffic Enforcement Officer.  It is unknown at this time whether the School Resource Officer (SRO) will continue or be reassigned to patrol duties in an effort to reduce overtime.

Watson added that if the decision is to no longer have a SRO, the officer in that position will return to patrol. An officer has accepted a tentative job offer with another police department which means he will most likely leave in 2-3 weeks, which means that no one will be laid off.  -Geisel

And a correction to our recent story on the Long Valley Hydrologic Advisory Committee (The Sheet, June 30, page 8). Ormat representative Charlene Wardlow wrote in, “Glad you could attend the meeting. One correction: you note the new CD-4 project will be at Shady Rest Park. The well field will be in that area, but the power plant is proposed up by the Southern California Edison substation, just north of the existing facilities at Casa Diablo.” Apologies to readers for any confusion. –Geisel