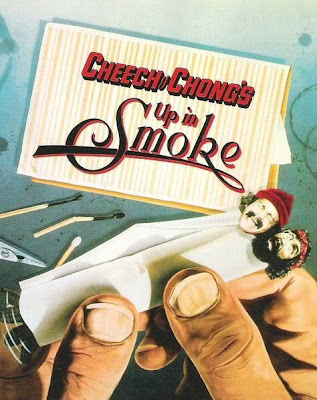 The Cheech and Chong reference, however, does raise the question: After the raid, how many MONET officers had the munchies? (Artwork courtesy Paramount Pictures)

It was a pot bust that would have made Cheech and Chong apoplectic, if they knew what the heck that meant.
As law enforcement cracks down on illegal marijuana growing operations in the Western Sierra, drug cartels are moving to the Eastside, but even here, they roll the dice and take their chances. The Mono Narcotic Enforcement Team (MONET) raided two sophisticated large-scale cultivation operations August 10 and 12 in remote areas of the Glass Mountains and Wildrose Canyons as part of the annual campaign to eradicate Mono County marijuana cultivation.
MONET agents were assisted by the Bureau of Narcotic Enforcement, National Guard, U.S. Customs and Border Protection, Mono County Sheriff, Inyo County Sheriff, Inyo Narcotic Enforcement Team, USFS. Bishop Police and the California Highway Patrol.
Officials determined one of the sites had been abandoned possibly in response to recent fires and the fact that citizens had accidentally stumbled across the location. No suspects were arrested at either site. Law enforcement seized more than 26,300 marijuana plants combined from both sites, with a potential street value of $78,900,000.

National Park Service Rangers and Fish and Game already raided a marijuana farm growing in Sequoia National Park in June. Over the past few years, large growing sites have been found in mountain locations near Independence, Big Pine, the White Mountains and the Glass Mountains.
Local law enforcement officials view illegal marijuana growing operations as a multifold problem with environmental destruction and public safety as the two main concerns. Not only are local officials worried about Sierra growers becoming more vigilant and violent, they also see the crops as an ecological disaster scarring public lands and national parks.
“The biggest problem is the destruction of the forest,” said MONET Detective Paul Robles. “What [the growers] do in one season lasts for years. The pollution to the water and soil is a huge problem. What they do to the forest is really irreparable; we won’t see that back [to its natural state] in our lifetime.”
In 2008, Drug Enforcement Agency (DEA) officers reported that 70 percent of the 5 million plants found in California by law enforcement were on public lands. Most often, the burden of post-raid cleanups falls on the National Forest Service, which doesn’t have the funds to pay for thorough site restoration.

Robles said illegal growing sites require vast clear cuts to make room for the plants, sometimes removing thousands of trees from an area. Site operators will construct irrigation networks with pipes running from water sources to the gardens. Since some sites are used more than once, growers sometimes bury years of accumulated human and garbage waste in the ground.
Growers also rely heavily on pesticides and fertilizers, which leach into the soil and eventually make their way to nearby water sources, negatively affecting natural flora and fauna, said Inyo County Sheriff’s investigator Jeff Hollowell.
“Growers are introducing objects that aren’t natural to the area, causing short and long-term repercussions,” Hollowell said. “We don’t know how long it will take for reclamation to take effect.”
As the Forest Service does not have a separate funding source for site restoration projects, cleanup efforts are minimal, leaving locations bare and contaminated, said Mary Beth Hennessy, resources staff officer for the Inyo National Forest. The amount of cleanup depends on how long sites have been in operation. Some require more restoration work than others, and most of the work is done by volunteers.
In order to comply with the Clean Water Act, the USFS implements the bare minimum to meet requirements regarding water quality and erosion. However, due to lack of funding, nearby water sources are not tested for contamination.
“You think of the poor hiker downstream who thinks he might be drinking animal pellets, but not fertilizers and pesticides,” Hollowell said.
Bishop resident grower and dealer Robert Marley (pseudonym used to protect identity) said he knows how harmful it can be to grow marijuana up in the Sierra. He said when he grows, he uses natural barriers to protect against pests and doesn’t plant directly into the soil in order leave the area relatively unharmed.
“All the weed I grow and smoke is organic,” Marley said. “You can really tell the difference. The other stuff is just foul.”
The plant also acts like an invasive weed, he said, and growing a non-native species in a delicate environment can cause serious damage.
“An alpine location is such a fragile ecosystem already,” Marley said. “You’re introducing such a destructive plant, there’s no way the result can be good.”

Shift to the Eastside

In recent years, Mexican drug cartels have been moving growing operations into the Eastern Sierra. Drug trafficking tactics have shifted from bringing drugs over the border to just growing them here because of tighter border surveillance.
Robles said dealing with drug trafficking is nothing new to Inyo or Mono counties, but the growing sites back in the ‘80s and early ‘90s weren’t the large-scale operations they are now. He said law enforcement is cracking down hard on illegal farms in Southern California and the Western Sierra, so growers are steadily moving to the east side of the mountains.
Growing sites in Inyo and Mono counties haven’t reached the scale of operations found in other counties. Until this year. Other counties have routinely discovered crop yields of 10,000 plants or more, while last year, Robles said Mono County’s largest find was 5,000 plants.
Robles said even small grows require clear-cutting large amounts of land. In order to keep farms less conspicuous, growers will put 500 plants together in a plot, and then place another 500 plants in a different plot a couple hundred yards away. This way, vast marijuana grows cannot be easily spotted from the air by helicopter crews. However, the spreading out of farms causes more ecological damage as it requires more trails, more rigorous irrigation projects, and affects a larger area of land.

The solution for eradicating illegal marijuana operations is constantly being debated and remains a point of contention between law enforcement, politicians, growers and dealers.
Inyo County Sheriff’s Investigator Hollowell said one solution is to go after the “higher-ups” in the operations and make sure growers know that the punishment for getting caught is larger than the profit.
Hollowell said law enforcement is working on identifying targets inside and outside the country who are the leaders in drug trafficking organizations.
“We all want these growers out of our forests, and off our public lands,” Hallowell said. “But the big picture is going after the bosses.”
He said growers often don’t even know who the “bosses” are. All they know is that if they grow weed for a few months out of the year, they can make some money to provide for themselves and their families back in Mexico. However, Hollowell said, if they realize that growing in national parks is a federal crime with a sentence of up to 10 years in prison and deportation, they might be dissuaded from joining an operation.
To tackle the problem from a different angle, some politicians are rallying for the legalization and taxation of marijuana. With the average Park Service valuation of each plant at $4,000, the value of the total plants seized in 2008 in California was $14 billion. In the wake of budget deficits, the idea of taxing a huge cash crop is tempting.
Oakland became the first city in the country to approve a medical marijuana business tax on July 21. Other California cities, including Berkeley, San Francisco, Santa Cruz and Los Angeles may also pursue a tax.
Going even further, Assemblyman Tom Ammiano (D-San Francisco) introduced a bill that would legalize and tax all marijuana in the state of California. The tax could reel in nearly $1.4 billion in state revenue, according to an analysis by California tax officials. Governor Arnold Schwarzenegger recently stated that legalization measures should be considered and debated.
Bishop dealer Janice Lennon (pseudonym used to protect identity), however, said the best solution will be as complex as the problem, targeting all facets of the issue. She said that arresting growers will not solve the big picture, since that’s just one small layer of the problem. She also said that legalizing pot could have negative consequences if it resulted in mass production on a corporate scale.
Marley said as a dealer he’s afraid legalization would make the marijuana market like the cigarette industry. He said he could see large companies fusing marijuana with deadly chemicals to make more addicts. The solution becomes a toss-up between going to jail for growing it or getting cancer from smoking it, he said.
Keeping cartels out of public lands is key, Marley said, but the underlying problem is that if local growers can’t grow marijuana themselves, then other people will enter the country and grow it. In addition, legalizing marijuana within the state would not prevent the fact that growing and selling it is a federal crime. Growers would still not be protected from federal charges.

Until there’s a policy resolution, local law enforcement officials recommend hikers take precautions to stay safe, as Hollowell said growers are realizing how much is at stake and are becoming increasingly aggressive.
“Get away as quick as you can,” Hollowell said. “They’re armed and getting more violent. Before, they just hid. Now they’re confronting trespassers.”
Nancy Upham, Forest Service Public Affairs Representative, said that signs of a marijuana site include PVC (plastic) pipes, hoses or drip lines, propane tanks or bottles, fertilizer bags, rat poison, weapons, garbage, hikers with extremely heavy packs, a well-used trail where there shouldn’t be one, the smell of marijuana (like a skunk), and of course the actual marijuana plants.
Hollowell said if hikers see any of these indicators, they should contact their local law enforcement with any helpful information they have, such as the location on a map, GPS coordinates, or directions. The most important thing though, he said, is to get out of there as quickly and quietly as possible. Fiddling with a GPS system is not as important as getting out alive.