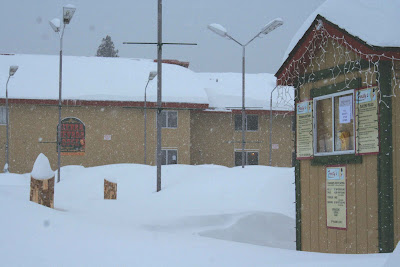 Fore … make that FOUR feet under … the main “fairway” at Frosty’s Golf, next to Rafters on Old Mammoth Road, is buried under at least four feet of pow pow Thursday morning. (Photo: Geisel)

If we’re indeed snow farmers up here in Mammoth Lakes, well, this week’s crop report is excellent.
The onslaught of storms this week had dropped 4-5’ of new snow in town as of Thursday morning with more on the way.
Winter storm conditions were prevalent from the Owens Valley into Nevada, though most of the heavy wind conditions were confined to Southern California, hugging a jet stream that sagged just far enough south.
U.S. 395 was closed most of Wednesday night, and parts of the interstate experienced off-and-on closings as weather improved and then deteriorated with the passing of various storm fronts.
Another foot was estimated to fall by end of Thursday or early Friday. MMSA’s website said the ski area is closing in on 240 inches so far this season.
Mono County seemed to weather the weather with few hitches. Sheriff Rick Scholl briefed the Board of Supervisors on Tuesday, saying preparedness was solid for the first of the series of storms earlier in the week, with only a 5-11 p.m. road closure to report by the end of Monday.
June Lake and Bridgeport shelters were opened up briefly that same day to help some stranded travelers, but closed up soon after. Emergency services geared up for increasing snow and related weather from the next wave of incoming storms that tracked across the area as the week progressed.
Expect a break this weekend, with more snow possible by Tuesday, and another round by Friday or Saturday, broken up by periods of partly cloudy (or partly sunny, depending on how you look at it) conditions in between.