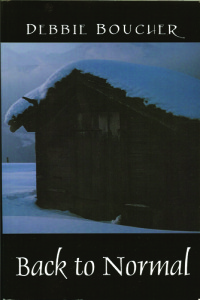 “What would happen if one woman told the truth about her life? The world would split open.” – Muriel Rukeyser

Set in Pleasant Valley, a fictional Mammoth Lakes-esque town in the Eastern Sierra, “Back to Normal,” the first novel by retired teacher and Mammoth local Debbie Boucher, is the story of Sue Beauchamp, whose world splits open when she must finally deal with a lie from 20 years earlier – the wintry night her daughter Michelle was injured in a car accident.

“It was black ice.” Chris eases his grip on Sue’s arm. Bile burns in her stomach and rises to the back of her throat. Why did she agree to allow Michelle to drive herself home from college in winter?

“Thank God Caltrans noticed tire tracks going over the embankment and radioed CHP.”  Wisps flutter past frosty panes as he flips on the deck light. “Damn. The storm’s here already. The weatherman was wrong — again. We have to go.”

The trip to the hospital is only the beginning of Sue’s heartaches.

Saving Michelle requires a blood transfusion that can only come from John, Michelle’s biological father, who as luck would have it, happens to be a neighbor. Sue knows she’s tempting fate by calling him. And it doesn’t take long for John to figure out what’s going on, and that both Chris, Sue’s husband, and Michelle have never been told he’s her real father.

Once that secret’s out, all hell breaks loose. Her relationship with Chris and “his” two sons is threatened. Michelle takes the revelation badly and runs off. And John presses Sue for a relationship with a daughter he’s never been allowed to know. All this leaves Sue trying to mend strained relationships and restore some semblance of normalcy for herself.

In an age when books about family matters find themselves competing with the latest Robert Langdon adventure by Dan Brown or books about teen angst-ridden vampires, “Back to Normal” is a breath of fresh air. It’s a simple story, and by that I don’t mean that it lacks plot. There’s a nicely-woven pretzel of personal drama here, but its rural setting and characters make it even more intimate and cozy.

Readers with only a passing familiarity for ski town life (or none at all, really) can still relate to Pleasant Valley in winter, but Mammoth locals will also enjoy some subtle nuances (references to kids going to ski team practice, the Forest Service) that are part of a family routine.

Structured essentially in three main parts, Boucher uses the middle of the book to flashback to 1971, which provides more background on Sue, and how she made the choices that would define her life and love for the next two decades.

For her first novel, Boucher’s style is sure-footed and flows well. I particularly liked her use of writing in the present tense and keeping the reader in the moment, making him/her feel as if they’re another character in the book. The chapters are already concise, but the slice-of-life delivery makes for a genuine page-turner. Before you know it, you’ll find yourself pretty immersed in the book.

“Back to Normal” is categorized as “contemporary women” fiction, but it’s more than just a Lifetime movie in print. The characters, both women and men, are identifiable and interesting. Guys, don’t dismiss this one as a “chick” book. Sue Beauchamp is flawed to be sure, aren’t we all, but I care about her, every bit as much I do another literary Beauchamp, Claire in Diana Gabaldon’s “Outlander” series. But that’s another story.

“You shall know the truth and the truth shall set you free.” That biblical quote (interestingly enough from another John, the apostle) appears in at least a couple of places in the book. Truth is the overarching theme, but also interesting is Boucher’s exploration of the gray area that exists between truth and lies.

I won’t tell you how it ends, but suffice to say you’ll want to stick around for every last page of this emotional, but ultimately worthwhile journey that takes us from Pleasant Valley “Back to Normal.”

Pick up a copy of “Back to Normal” and get it signed by the author. Boucher will be at two book signings this weekend, at Spellbinder in Bishop on Friday, April 2, from 4:30-6 p.m., and another one at Booky Joint in Mammoth Lakes on Saturday, April 3, from 3-5 p.m.